And That's My Take, by David Thorpe

David Thorpe is an aspiring syndicated columnist who shares his wit, wisdom, folksy humor and unique personal perspective in his weekly column, "And That's My Take." Currently, this column is not printed in any major newspapers, but interested editors are encouraged to email him at davidthorpe@somethingawful.com to discuss syndication terms. 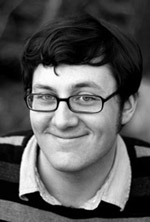 Syndicated ColumnistIn this fast-paced modern world of forty-hour work weeks and demanding high-tech gadgets, we sometimes feel like we don't have much time left for ourselves. Well, that's hogwash, says I. Time is a renewable resource, folks: they're always making more of it.

People often ask me, "David, I really need you to get that job done in a timely manner," their voices lilting upward at the end as if it were a question. "But why?" I tell them; "after all, we all have a practically unlimited amount of time in which to accomplish everything."

You see, folks, if there's one thing we have in this life, it's time. Our days stretch before us infinitely, each one seeming longer than the last. And the average human lifespan is sixty-seven years, which translates to almost twenty-five thousand days. Twenty-five thousand. To put that in perspective, that's more than one thousand days for every hour in a day. And you were worried about not making it to the grocery store this afternoon, or forgetting to pick up junior from football practice? Ha! With that many tomorrows looming before us, how could we possibly run out of time?

Maybe you've always wanted to travel to Paris, or take a cooking class. Sure, folks, you could just drop everything and hop on the next bus, but what's the hurry? Before you die, you'll have a chance to do all the things you've ever wanted to do, and many more. "But I might be hit by a bus tomorrow," you may protest-- quite right you are, ma'am, but I'm sure you'll manage to make it to Paris before then. Tomorrow's a long way off!

So, the next time somebody uses that tired old line on you-- "we really need you to get that work done today, or we'll all be in big trouble and you'll probably get fired,"-- just tell them to slow down, take a deep breath, and remember that we've got all the time in the world-- and that's my take.

Please, editors; his column is only 350 words, and only requires a little bit of space on a page. You could put a big ad underneath it and make some money. David Thorpe has a lot to say, and has great difficulty getting people to take him seriously in everyday life due to his stammer and his uncanny, fishlike mannerisms.

Feeling Blue? Surround Yourself With Things 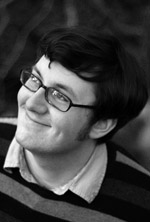 Celebrated National ColumnistClutter is a pretty ugly word-- it sounds a bit like "gutter," with all its connotations of filth and low living. But let me tell you, folks, there's nothing filthy about wanting to keep yourself surrounded by meaningful things.

Take my apartment, for example. It's far from a stately manor, folks, but it takes me a good fifteen minutes to walk from my door to my desk, because I have to step over and through a tremendous amount of my prized possessions: stacks of newspapers, bags of bottle caps, my many pets, empty plastic bottles, found objects, old boxes, knick-knacks and bric-a-brac. It may be a little time-consuming to get from "Point A" to "Point B," but I wouldn't trade my lifestyle for all the space in the world.

They say one man's trash is another man's treasure. Well, I can personally attest to that-- I've been evicted by landlords, dumped by girlfriends and investigated by animal cruelty officers (cruel? No way. I love my kitties!), but being surrounded by the things I love truly makes it worthwhile. Every time I clear off my chair and sit a spell, I look over my glorious drifts of possessions and feel a swell of pride, like a dragon surveying his cave full of jewels.

My ways have caused me some hardships over the years, but it's still a lifestyle I advocate. Next time you finish up a pizza and you're wondering what to do with the box, just stop and think: somebody made this box. It's square and sturdy and it would be a nice thing to look at for a while-- so why not keep it? The pizza may be gone, but that box could give you enjoyment for years and years.

Folks, you'll hear a lot of ugly names for people like me: packrat, hoarder, junkman, clutterbug, trashbear. But I'll tell you what I call myself: the happiest man in town-- and, if you use your imagination a little bit when you look in my window, the richest, too-- and that's my take.

David Thorpe would very much appreciate seeing his work in print just once. Maybe you could just print one of his columns as a letter to the editor? Or you could put it in the back of the paper, among some unsold ad space. You could even make it look like an ad, or you could insert some copy about a steakhouse or a massage parlor in the middle of it.

Let's Put the Past Behind Us 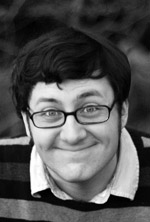 Famed Literary TreasureWhen did "holocaust denial" become such a dirty phrase in this country, folks?

Oh, make no mistake, I'm not saying it never happened. On the contrary: it happened, all right, and it was more terrible than we could possibly imagine. Millions died, and the shockwaves of horror are still being felt today. But really, folks, how long are we going to let it bring us down? I know humanity has a natural impulse to dwell on the tragedies of the past, but it's been over sixty years now, people-- it's time to put our mistakes behind us and move on to a brighter future. It's time to deny that humanity could ever be so evil.

What value is there in recalling our darkest days? If we remember the past, we're doomed to be sad about it forever, and every Oscar season will be clogged with tear-jerking concentration camp stories. But if we forget about it completely, if we suppress and deny it and banish its memory from our lives, we can begin to move on-- and, more importantly, we can ensure that no mad dictator of the future will read a book about the holocaust and say, "hey, that holocaust, that was a pretty good idea, maybe I'd like to try that out in my own nation." As the old saying goes, only by forgetting the past can we be sure somebody won't repeat it.

Let's consider the dignity of those who died. Would they want us remembering them as "victims" for the rest of eternity, or would they want us to move on and find happiness? Folks, let me tell you, if I'd been killed in such a tragic event, I don't think my soul could find peace until society was able to turn a corner and stop lamenting me. It would be downright selfish to hope they'd remember me forever, wouldn't it?

I propose, folks, that we take all the records of this horrible event-- all the books, the documents, the Oscar-winning films, the memoirs and the photographs-- and burn them in a huge bonfire. Only when the flames crackle around the last pages of Anne Frank's diary will the atrocities of Adolph Hitler be symbolically destroyed once and for all-- and that's my take.

David Thorpe knows that the newspaper industry isn't doing so well right now, so he would be OK if you didn't pay him for a while. He has a job shooting animals at the dump, so he's able to pay his rent and more or less eat regularly. He'd just like to share his words with people, because he has a lot to say and people sometimes don't take him seriously. Please, send him a message at davidthorpe@somethingawful.com and we'll shoot the breeze about printing his columns, or about pretty much anything! He knows what's going on with a lot of TV shows, and he has lots of interesting views on politics, so please talk to him.