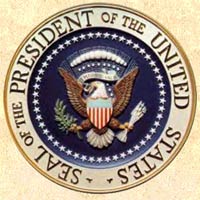 Seal the deal, America.One of my biggest complaints about living in the United States is that, for all intents and purposes, it is a completely insane country. Most Americans are amazingly unaware of this fact, and that's partially why the country remains so batty. If they could only pry themselves away from the hypnotic allure of NASCAR or reality TV, they might notice things are a bit odd. They might also notice that the man they elected and trust to lead them is a cartoon cowboy who, through a magical process, was brought to life out of a Looney Tunes short. Sure, the rest of the world is just as bad, but America is very powerful, and as a powerful nation capable of blowing the world up a few times over, maybe we should take things a bit more seriously when it comes to picking leaders. The fact that pretty much only the elderly vote doesn't help, because most of them simply do not know that we are living in an age that is dramatically different from the one in which they were scientifically engineered. Time changes and so do needs, but old people stay the same. I don't hate the elderly, Americans, or America, and I certainly wouldn't trade my insane country for any other, except maybe the Island Kingdom of Tonga, which I fell in love with while negotiating a business deal on behalf of Something Awful Industries. I just wish people would be smarter about things.

In America, we elect the worst possible leaders from a handful of the worst possible candidates, and we don't find this to be the least bit strange. Some mysterious alien group supplies us with the two biggest assholes available, and we pick the one that does the best job promising to cut our taxes or protect us from the enemies we train and inspire. I'm not some smelly liberal still reeling from Albert Gore's extended defeat, because I know he was just as lousy as Bush. While I'm pretty confident he wasn't as murderous lousy, he was still lousy nonetheless. This country has a great tradition of electing crazy people, such as deranged cowboys and puffy womanizers, so I suppose a relatively human president would be an awful lot to ask for come election time. I imagine it would probably take the concentrated wishes of a million dying cancer kids to spark any real change in public opinion here, so I will continue to bide my time and encourage infants to take up smoking

You may get the impression that I'm completely hopeless about this country, but that's not true. I think there is still plenty of hope left for this mysterious land we affectionately refer to as "USA #1." The future, like a giant neon arrow pointing straight down into a toilet, is as bright as ever. We may be in a dark spot, but there is always hope for tomorrow, and good precedents we can look back on to comfort us. One such good precedent is the term of President Dave Thomas, a man who truly loved this country and the various humanoid parasites that infested it. Although Dave Thomas has since left our earthy world to venture the heavens in ghost form, perhaps on the back of a silver surfboard, the legacy of his presidency resonates like a sonar ping blasted through a loudspeaker in the Grand Canyon. We remember you, Dave. I remember you. 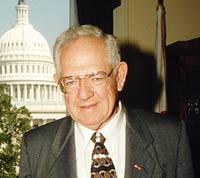 Dave Thomas, we salute you.Thomas, like the Roman dictator Cincinnatus, was swept into power in a time of need. He served for one term, and then retired to the bountiful offerings of his restaurant empire never asking for more and only doing what was needed. In his time in office, Thomas was instrumental in boosting national pride by unveiling exciting new sandwich offerings, which brought the country together by giving us common ground while still maintaining a diversified menu. As hard as they tried, the Soviet Union was unable to match the deliciousness of Thomas' succulent arsenal of hamburgers. And though they came close at times, their efforts ultimately proved fruitless and embarrassing. A few radioactive hamburgers could never compare to the delicious all-beef pride Dave instilled in us all. But he was not above diplomacy, as the Cold War was never as black and white as it was made out to be. How many times was nuclear disaster averted thanks to swift negotiations in the booth of a Washington D.C. area Wendy's? The taste of those delicious sandwiches must surely have put the stern representatives of Moscow at ease.

Dave was not averse to the military or to taking tough action when needed. Luckily, his term was at a time of relative stability in the world, and so he never had to manage anything more than minor skirmishes. Dave not only served in the Army himself, but was also close to Colonel Sanders, a legendry figure in the Armed Forces. There is no doubt Dave called upon the teachings of his friend in times of crisis, listening to the Colonel's thoroughly original blend of seasoned wisdom. Thanks to the stability of the era, Thomas was able to exercise his compassionate side the most, by sending ample relief packages to those in need anywhere in the world. You just know they enjoyed every morsel of those packages.

As a young boy, I remember watching his State of the Union addresses, captivated by his energy and charm. His gentle grandfatherly voice spoke of great changes, of new promotions, and of American values that would echo in our hearts and wallets. In an age where every line that a politician says is meticulously calculated to be devoid of any sincerity or meaning that might be taken the wrong way by influential supporters, Thomas spoke his mind in a way that elicited trust from the common man and respect from the powerful. His recipe was to never betray his hard working American roots. This caused jealousy in some of his peers, but Thomas managed to avoid any major scandals by sticking to his guns and staying out of the political swamps. True, there was an episode where his annoying relatives came to stay at the White House, and he spent some time evading them by sneaking off to nearby Wendy's franchises, but that was good clean fun. 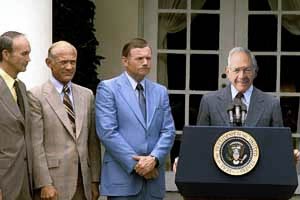 Dave, you soothed the aching throat of America with your cooling shakes.Thomas bolstered the economy, taking it to untold heights with the creation of millions of fast food jobs for Americans. Not since Roosevelt was there a president so motivated to get people back to work. With a dark storm cloud of economic decline hovering over the country, Thomas entered the White House in a sea of shimmering sunlight. Like the gentle arm of a peaceful construction crane, the star of Dave Thomas rose up high into the sky and flexed its hydraulic muscles of light. America ordered prosperity, and Dave Thomas gave it to them with a side of fries and a soft drink of their choosing.

So now in this dark and uncertain time where two-dimensional terrorists threaten our way of life apparently for no other reason than our very existence, and where our leaders seem to do anything but lead or listen, let us look back at the lessons of Dave Thomas. Although he is no longer with us in body, his spirit is a part of us all. He was an explosion of good, and his shrapnel is embedded in the fabric of our skin. Thomas worked hard all his life, and when he came to lead us, he made sure there was something on the menu for everyone. That's the essence of democracy – giving people real choices. When it came to American Pride, Dave Thomas wasn't afraid to do things right and Biggie Size it. As pessimistic as I am, I know that there are others like him out there, just waiting to be called upon. Come Election Day, I'm letting the world know what I think. I'm writing in Dave Thomas on the ballot.