The US vs. Taliban: PHASE 6

Blowin' Up With Mr. Cooper

As Zack mentioned in his update yesterday, he was recently incarcerated for indecent exposure in a petting zoo. Oops, no wait, my mistake. That's the thing he didn't want to mention yesterday. Sorry folks, let me try this again. As Zack mentioned yesterday, he was once beaten up by a gang of bicyclists at a highway reststop and they used his face to mop the floor of the men's room. Shit, hold on, that was another thing he didn't want me to say. I'll give this one more shot. As Zack mentioned yesterday, the US Government wouldn't let him join the Army because his debilitating hair fetish caused him to uncontrollably ejaculate into soldier's helmets. Dammit, I screwed that one up too. Okay, enough of this, I'm just going to launch directly into the article.

U.S. drops massive bombs on Taliban - The United States has begun using the biggest conventional weapon in its arsenal over northern Afghanistan, NBC News has learned, dropping two BLU-82 daisy cutter bombs last weekend on troops of the ruling Taliban militia. Use of the 15,000-pound bombs  which leave craters as wide as five football fields  marked a dramatic increase in firepower over northern Afghanistan aimed at helping the opposition alliance launch an offensive in the north.

Now if you're like me, and you'd better get down on your knees and pray to God you're not, you'll find this news to be very exciting. Let's face it: the war on the Talibaneseiumologists has been downright boring. Cameramen haven't been allowed to tag along with the elite US military squads. Reporters are kept in the dark, away from all the military action. Pentagon officials have been tightlipped. All of these factors contribute to making this the most dull war ever, causing many people to pass by the daily news stand and instead purchase a tabloid with the front headline:

While the recently military action certainly isn't as impressive as Devil Spoon, it is nonetheless a break from the boring, banal, everyday updates of the US military failing to kill people. News reporters, after polling various other news reporters (namely themselves), have already declared this war a big fat failure. They claim many members of the American public (namely themselves), are quickly growing tired of the war and want the military to go back to what they should normally do, which is apparently not blowing up things. So this whole 15,000-pound bomb news item is just a kick to the world's collective crotch, bringing national interest back to the war and giving many Americans cause to root for the home team, the team which has the 15,000-pound bombs and jeeps that weren't manufactured in the late 1930's. The Pentagon arrived at this genius solution of dropping 15,000-pound bombs after their previous strategies failed to succeed. After looking at these previous strategies, it's no wonder:

STRATEGY 1: Drop small bombs on things made out of sand. Send in an elite military attack force to panty raid somebody's house and get hit with rocks while trying to leave.
STRATEGY 2: Drop slightly less small bombs on other things made out of sand. Have a pilot wreck a helicopter while he's trying to eat Funyuns and change the radio station at the same time.
STRATEGY 3: Drop medium sized bombs on enemy mountains and dirt piles. Send in an unmanned spy probe to crash into threatening-looking enemy walls.
STRATEGY 4: Drop above-average sized bombs on evil hospitals, decreasing the chance that the Taliban can attack our soldiers with hypodermic needles and aspirin.
STRATEGY 5: Drop somewhat large bombs on top of all the unexploded above-average sized bombs, most of which have been hollowed out and used as condominiums by Afghans.

This is all that the American military, employing the brightest and most clever military scientists and strategists across the globe, shrewdly elected to do. That's it. Oh sure, there have probably been some ultra top secret cyborg spaceman commando raids of Taliban peacock breeding farms or whatever, but this has been the majority of this so-called "action." As a result, I propose we move to my own ingenious idea, "STRATEGY 6: Drop huge bombs," a plan which many Americans will undoubtedly deem as "okay with us just as long as it doesn't land on our heads while we're watching 'Sex and the City'." I have coordinated with The Pentagon to release the following informative chart, describing how effective "STRATEGY 6" will be compared to previous attempts.

As you can plainly see, the military uses really fruity colors and doesn't have access to a decent graphing program. In addition, the number of deaths is directly proportional to the size of the bomb used. Smaller bombs, while not weighing as much and being less large, aren't nearly as effective as larger bombs, which are quite larger than much smaller bombs. While that's all peachy keen and swelltasticular, you can't blow people up when you don't know where they are. Just look at that guy from "Caddyshack"; he spent the entire film trying to catch that gopher / chipmunk / jackal thing, and all that resulted in was his repeated embarrassment and various comical mishaps. The US can't afford to engage in comical mishaps in Afghanistan because the Taliban are much more heavily armed than a majority of gophers, and I doubt Chevy Chase could come up with a sufficient supply of witty remarks to make when his platoon is blown up by a crate of dynamite strapped to a camel. The US needs to devise a way to find the Taliban and bring them out into the open. "Strategy 6" will do this by dropping millions of the following beautiful leaflets on their villages.

Note that the card is printed in English. Since most Taliban soldiers can't read, it doesn't matter what we write there. We could quote the punchlines from the past 50 Garfield comics on there and it would have the same effect. Well, assuming we could find 50 punchlines from Garfield comics. There would also be some kind of tracking device stuck on the back of each card so our unmanned spy probes could monitor the signals, track them down, and eventually crash into a hill hundreds of miles away. That would be Phase 1 of Strategy 6. Then we'd unleash our next deadly attack: The BLU-82 Mealbomb. 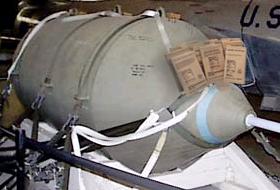 Currently, we've got Air Force pilots flying everywhere over Afghanistan, back and forth, back and forth, back and forth all day over and over again. Some guy in the back of the plane shoves out either bombs or food, depending on what his plane was filled with. The pilots don't even know what they're carrying anymore; they just shove it out the back of the plane. If people on the ground start running towards it, then it's food. If they start running away, then it's a bomb. The Air Force has had to split their planes up into Food Delivery Planes and Death Delivery Planes, and they're just wasting valuable jet fuel which could instead be used by John Carmack in one of his completely insane amateur test spacecraft launches. The BLU-82 Mealbomb combines both items into one easy-to-consume package and is both economical and deadly. For maximum damage, the bombs should be marked "FREE BUFFET INSIDE" and the names of the food should be crossed out and replaced with a more traditional Afghan dish, like, I don't know, broiled rice or twigs n' cheddar or mule surprise or whatever they eat over there. Death Dinner is Phase 2 of Strategy 6. The final phase, Phase 4 (we're completely skipped Phase 3 just to throw them off), will undoubtedly land the most brutal blow to the Taliban: an invasion of Counter-Strike players. 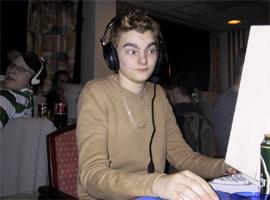 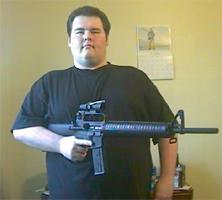 Counter-Strike players are known throughout the world as being the most aggressive, obnoxious, hyperactive creatures in existence. They're single-minded nutballs who only take a break from playing Counter-Strike to talk about guns, eat, update their clan site, write stories about guns, eat, draw pictures of guns, or eat guns. This mindless, one track devotion makes them the perfect killing machines... and since they claim to already be so knowledgeable in guns and the art of killing, they won't even need any training! All we do is box them up, ship them across the sea, load em into another plane, and drop them out of a plane over Afghanistan! Parachutes would be optional. The ensuing confusion would render the Taliban helpless:

Although Counter-Strike players won't really make an elite fighting force as I originally thought, they will cause the Taliban to waste precious bullets. Also they'll probably free up a shitload of bandwidth across the country, which means everybody else will have faster access to Japanese schoolgirl death porn. We could even force them to swallow tiny camera, so when their stomachs explode from incoming gunfire, audiences across America will get a live-action view of the evil Taliban soldiers. The crowds would probably cheer. So on second thought, let's remove the cameras and instead replace them with cantaloupe because I've always wanted to see somebody swallow a whole cantaloupe at once.

I think that this four / three step plan will easily render the Taliban defenseless, cold, afraid, lonely, and possibly dead. Even if it doesn't work, that's okay too, because I frankly stopped caring about the idea roughly five paragraphs ago. In fact, I forgot almost everything I just wrote, except the paragraph where I made fun of Zack for the time he threw up on the top of a rollercoaster loop and when they circled down again, the puke hit him in the face. Oh wait, I didn't actually write that before... that was just the thing I wasn't supposed to write. My mistake.