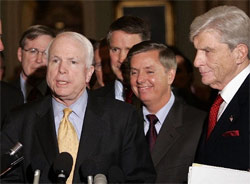 Pretend to fight, for our right, to not be tooooooortured!Recently drafted legislation from the White House sparked a political conflict within the Republican Party. The battle was over the definition of "torture" and the Geneva Convention and it saw Republicans like John McCain and Linsdey Graham refusing to redefine torture. The White House refused to back down from its legislation and threatened to shut down CIA counter-terrorist programs tasked with interrogating potential terrorists.

A compromise was soon reached that allowed prosecutors to use confessions obtained through torture in court and to submit evidence that was kept secret from the defense. The new legislation did not redefine torture, but rather listed "grave breaches" of the Geneva Convention and affirmed the President's right to interpret the Geneva Convention.

Murder and Rape are pretty clear cut, but by including torture the whole thing has just come around full circle with the powers of the Executive Branch being expanded once again. Republicans have been making the media circuit to explain this back room deal, but when the question inevitably comes to the "grave breaches" part, they clam up. They claim that they cannot reveal our "techniques" for fear that terror suspects could train to subvert these techniques. Far from being clarified, everything was as shadowy and sinister as before, with new reasons to be afraid and fewer answers for the American people.

Then I realized that Senator Bill Frist (R-TN) is like a human litmus test when it comes to torture. He gives Rob Zombie a run for his money when it comes to living dead girls, but that's a different story. Back in his college days Frist went to great lengths to convince animal shelters that he was adopting cats as pets. Once he had the cats he took them to his basement and conducted his own personal medical experiments on. Which included, according to Frist, cutting out their hearts and disecting them.

That is one dude who knows torture! If he knows how to rock the face literally off of Lil' Whiskers then you can bet your ass he knows the difference between some limp-wristed "stress positions" and honest-to-God-grave-motherfucking-breach torture. The only problem was that Frist wasn't talking. He was spewing the same line as the rest of the Republicans, so how would we know what torture had just been made legal and what torture was still, sort of, in a vague way, still illegal? Easy. Bill Frist reacts unconsciously to the mention of torture: everything from an eye twitch to a wink.

I compiled a list of hypothetical acts that could be used during the interrogation process and submitted them to Frist. While he read the list I recorded his reaction. If something was not torture he remained placid. If something was torture, then Frist visibly reacted. I cannot say that those acts Frist deemed torture are truly still illegal, but by Frist's unwitting admission they are, at the very least, real torture.

Even with Frist's help I have trouble unraveling this whole thing, and that's what bothers me so much. I know a lot of bad things have been happening that make Americans look like assholes. I know this new legislation supposedly clarifies rules so the CIA can interrogate people without torturing them, but it sure seems an awful lot like it is set up to allow more people to be tortured. I have a serious case of anger fatigue over all of the stupid shenanigans our government has pulled since September 11th, but this one still managed to get my freedom sense tingling. This awful torture business can't be what my country really stands for, can it? No, I'm really asking you, help me out here.

I've had a lot of political differences with people I know and close friends, and we've remained close friends, but this seems like one of those issues where it's hard for me to see any logic or humanity in the opposite side of the argument. I cannot countenance or comprehend the defense of torture as a means to an end when its very abhorrence is written into our founding documents and, so I thought, woven into the fabric of what it means to be an American.