I am a veteran of the Total Wars. In my time as a commander in Napoleonic France and feudal Japan I have seen men and empires and tree models alike wink out of existence. For all the cruel acts I have observed and contributed to, nothing compares to the horrors I have encountered in Rome.

It sounded like a vacation, a fine place to line men up and order them to run into other lines of men clutching pointy bits of metal. It is not. I feel as though reality itself is crumbling around me.

When I survey the battlefield all before me is blurry. Faces are crude and inhuman. Armor and weaponry are oddly angular, as if constructed from sheets of folded paper. Even the rolling hills and the forests that surround us exhibit a lack of detail that is almost menacing, as if nature has given up on this cursed land. 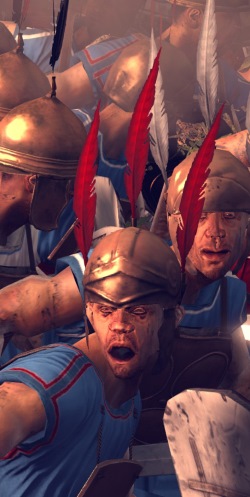 Images provided by forum user Mans and possibly Satan.Worse yet, all motion is stuttered and choppy. When the men march I get the sensation that I'm only witnessing half of their movements. It turns my stomach. My assistant offers to smear the lens of my looking glass, claiming that motion will appear more natural if I have fewer details to observe. His efforts only succeed in making everything look worse, which is a remarkable achievement.

As I go over the candidates to lead my newly created army, it occurs to me that everyone looks the same. Well, that's not fair. Some of these guys look like they started with the exact same face as everyone else, which is then pressed through a waffle grinder. Do you not have waffle grinders where you come from? I will gladly trade my freshly ground waffles for a world that isn't inhabited by creepy identical men.

Part of my job deals with diplomacy. I reach out to a friendly neighbor and seek an agreement to build a mutually beneficial trade route. They refuse to sign on unless I pay them 5,000 gold. If built, the route will provide each of us with 50 gold every year. I... have to think about this one. Do the people in this land understand what a year is? Or negotiation?

There is an important battle. I carefully position my troops to take full advantage of the terrain. As the enemy reveals their first moves, I make minor adjustments to my own plan. This is a clash between two strategic minds, to be waged and won with the lives of others. This is the distillation of human ingenuity and brutality. A gigantic flag appears way off in the woods for no good reason. We are told that if someone parks under this flag for a few seconds they will win the battle. Both sides throw strategy to the wind and run toward the flag as fast as they can.

Let's say a magic flag doesn't appear. The moment contact is made with the enemy, the battle turns into crowds of dudes slowly bumping into one another and yelling. Occasionally someone remembers to stab or parry. You know, the things people do when they fight. Only the first few rows of soldiers bother to grab a partner, while everyone else seems happy to stand still. I have seen the chaos of a frenzied melee. This is nothing like it. Here in Rome, the battles resemble two clumps of algae slowly meeting in a pond and settling against one another for five minutes, with one clump suddenly losing morale and running away.

I come across an ally on the road to our next conquest. He waves at me in a friendly manner and I wave back. When I attempt to take my army around him, this simple act proves an impossibility. One man has somehow blockaded a major road and prevented thousands of troops from advancing. He isn't trying to block us, of course. In fact, he seems as dumbfounded as we are. Is this a cursed road? Has there been some breakdown in the fundamental laws of nature? When I think upon the matter it sends a shiver up my spine.

One of our spies is a woman. When she steps onto a boat she delivers an overly sultry "Hello boys", projecting her words at a volume sufficient to make the entire army uncomfortable. When she disembarks the first words out of her mouth are (and I am not making either of these quotes up) "Sailors have such rough hands." All of us feel intimidated and more than a little weirded out by her boorish behavior. Is this how all women are? We don't know because this is the only female any of us have ever encountered.

Even the enemy acts in unusual ways. My men stand at the ready as the opposition rushes towards them. At the last moment the enemies turn on their heels, zooming back the way they came at top speed. After a few seconds they turn yet again to charge, repeating the process indefinitely. If the enemy is attempting to play mind games with my troops they might want to reconsider their strategy, as my archers are raining a torrent of projectiles down on their heads throughout this senseless maneuver. I have won several battles by standing still and allowing the enemy to sprint itself to death. I will do it as many times as necessary, but I will take no pleasure in it.

Like many of the horrors I have encountered in Rome, the madness of my enemy leads me to believe that this half-made world was not ready to be visited by humans.