The Toys I Never Had

As an only child with several generous aunts, I was pretty spoiled in my youth. I ate two meals a day, received more beatings than any kid could hope for, and the potato sack that I fashioned into a crude backpack (which had a mysterious, almost potato-like scent for some reason) was the talk of the school from third grade all the way through my high school graduation. Yet with all of my good fortunes I was never fully content.

There were certain toys that I longed for, but never got for one reason or another. In some cases they were too expensive. Some had a very limited productions, and the first time I saw them was in the back of a Toys R' Us catalog three months after they had been discontinued. Then there were the toys that would have made me too happy and, as my mother explained to me one morning as I ate my breakfast of stale Saltines in water, would have surely caused my fragile mind to misfire and electrocute the even more fragile rest of my body. This is why I was also not allowed to have friends or celebrate my birthday and national holidays.

Those elusive toys remained in my thoughts throughout the years. At one point they were no longer mere objects, but parts of myself that I needed to collect before I could go on with my life. Ahab had his white whale. Joan had her arc. Those two dudes had their car. I have my toys.

I've been able to pick up a few of these items from local comic shops and eBay, but the majority of them seem impossible to find so I'm turning to you for help. I've taken the time to describe a few of my most sought-after toys in as much detail as I could manage. If any of these items are buried away in your closet or attic or body cavities, please let me know and I'll gladly buy them from you for a fair price. Once I'm able to get ahold of everything in today's update, I'll post some more toys in an upcoming article. Thanks! 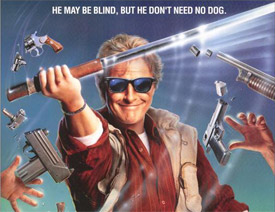 Long before I saw the Zatoichi blind swordsman movies, Rutger Hauer cleaved his way into my heart in Blind Fury while portraying a blind man who overcame diversity by chopping tons of Generic Bad Guys With Uzis And Shades into little pieces with his combination cane/samurai sword. His character's bravery galvanized the country's disabled. The deaf found the courage to stab neighborhood dogs with swiss army knives. Amputees were no longer too ashamed to set up on a rooftop and snipe innocent people. The mentally handicapped proudly bought Rob Liefeld comics.

This doll didn't have a spring-loaded sword swinging action arm or detachable shoes, but it had something far cooler. When you pulled the string in Rutger's back, he would quip one of his most memorable lines from the movie such as: 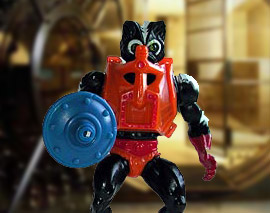 Oh man, I wanted this so bad. This fully-featured playset perfectly depicted Eternia's bank and all the incredible action associated with it. A drive-thru window for Battle Cat and the Road Ripper? Yes. Deposit boxes for Skeletor to deposit his evil plans? Hell yes. A vault full of slime? Of course. It was everything a He-Man fan could want and more. Where else could Stinkor apply for a home loan as Man-Ram busted through a wall to open a high-yield savings account? Only in our wildest dreams, that's where. This playset made those dreams a reality.

The prospect of mixing all the adventure of He-Man with all the financial responsibility of a trip to the bank had kids salivating back in the day. Friends continually turned on one another in the cafeteria when they found themselves on opposite sides of the "who would win in a deposit slip writing competition between He-Man and Skeletor?" argument. 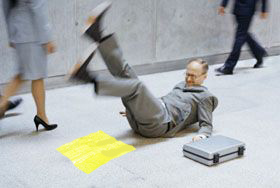 Essentially a very small version of the Slip N' Slide, the Slip N' Fall was marketed as "The perfect way to have wet n' wild fun anywhere you go!" Kids were instructed to lay the one foot by one foot sheet of slick plastic on a flat surface such as a hardwood floor or concrete, then spray it with water and hop on feet-first for an unforgettable ride.

I'm not really sure why this thing disappeared so quickly.

The classic Transformers were awesome but over time the franchise lost its way, becoming needlessly complicated. For example there was the ridiculous Beast Wars series, which had the robots we all know and love transforming into monkeys and parrots and shit instead of jet fighters or spiffy cars or boomboxes. It's a little-known fact that in the transition from the classic line of toys to Beast Wars, a number of experimental figures were released to gauge the audience's interest in robots that could transform into entirely useless objects. So enters Rocktree.

Rocktree is unique because he doesn't have a base robot form. We're all familiar with Optimus Prime and Bumblebee leaping into action with huge laserguns in their hands, kicking other robots in the metallic junk and headbutting apartment buildings with their robotic foreheads. Rocktree can't do any of that. He starts out as a rock, and he transforms into a tree. He doesn't have a gun or even a face. When you think about it though, I think that gives him an advantage.

Rocktree failed horribly. There were less than a thousand figures produced, and eight hundred of those were angrily thrown against a wall one at a time by the toy company's Chief Financial Officer. For some reason though, I thought he was the coolest of all the Transformers. I used to sit in my yard all day and imagine I was Rocktree, staying perfectly still in tree form while the Decepticons discussed the details of their latest evil scheme at the company picnic under the shade of my robotic leaves.