Where Have All the Teen Shoppers Gone?

Anyone who grew up in America in the '90s probably has fond memories of the mall, that quintessential teen hangout. For my generation, shopping was synonymous with youth, and the sound of muzak and laughter echoing down a mall concourse was as American as Coke, Monday-night football and the American version of Godzilla.

But things have changed, experts say. According to recent reports, teen shopping has been decreasing over the last decade and will drop even more in 2016. Unlike their parents, the reports claim, today's teens are no longer enamored with malls and department stores and spend their time and money elsewhere.

I'm skeptical, however. How could shopping, such a vital teen pastime, suddenly have fallen out of fashion? Don't teens enjoy the products and services we adults provide them? Don't they want to give us their money, so we can in turn keep giving them excellent goods and lucrative retail and fast-food jobs? Surely reports of declining teen shopping must be exaggerations, or anti-capitalist propaganda.

To prove that teen shopping is alive and well, I'm visiting my local mall. If I'm right, the place will be swarming with teens buying merchandise, trying on clothes. Affirming their loyalty to us.

Walking through the glass door, I'm greeted by the warmth of central heating and the soft throb of pop music. I haven't been here in over a year, but the place is just as I remember it - clean, sleek and linen-scented. Except for one thing: there are no teens anywhere.

"Teens?" The first shopper I see, a man in his late thirties, looks surprised when I question him. "There haven't been teens here in a long time," he says. Then he adds, darkly, "I think they've abandoned us."

"That's silly," I say. "The teens must be here somewhere."

I walk down the concourse in search of teens. Without them, this place feels eerie, ominous somehow. The muzak sounds tuneless and hollow and the kiosks look strangely sepulchral, like mini-mausoleums. My hopes are briefly raised when I hear young voices in the distance, but it's just the movie Project X playing in an empty TV store. 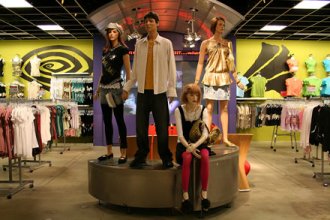 I enter Abercrombie & Fitch, a popular youth haunt, hoping I'll find some teens there - no luck. The store is empty, funereal, a museum exhibit on twenty-first-century fashion. Mannequins stand vigil over untouched merchandise, staring at me like the bust of Ozymandias. If there were teens in this place, they left long ago.

"Can I help you find something?" the saleswoman asks.

"The teens are gone," she says coldly. "There are no teens here."

When I ask her where she thinks the teens have gone, she opens her mouth as if to answer but then stops herself. "I think you should leave," she says a moment later.

Getting nervous, I visit the mall bathroom and scan the graffiti on the walls, searching for any clues as to the teens' whereabouts, but all I find are curse words, and crude hearts with names in them like Mike and Jessica. These sound like teen names, but where are the teens they belong to? Staring at the wall, I begin to panic; maybe the teens really have abandoned us. Then it hits me: it's 3:00, a popular hour for the teenage ritual known as "snacking." Surely the teens must all be at the food court, buying sugary treats with the money they've earned in our stores, kitchens and factories.

I rush to the food court, certain that I've solved the mystery, even laughing at myself for worrying earlier. The teens would never leave us; they need our malls, our schools, our iPhones, just as we need their menial labor and precious disposable income.

I turn the corner to the food court and instantly my heart sinks.

The court is deserted, the shops closed, chairs overturned on tables. The air smells like death and stale pizza and crumpled wrappers roll by like tumbleweeds. Surveying the desolate scene, I feel panic swelling in my chest once more and can no longer stifle its harrowing refrain.

The forlorn sound of my echo is the only reply.