Trinity and Neo Die in the New Matrix 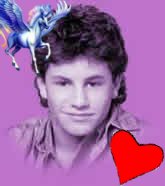 Hey gang! Your pal Frolixo here for Something Awful, the online teen magazine dedicated to bringing you the hottest boys from today's movies and television. Thanks to teenage girls and extremely lonely bachelors we are now number one, beating out such sites as "Tiger Beat Online", and "Underaged Naked Boys Quarterly". Some of you may be wondering why we turned from an exclusive humor site to an online entertainment magazine for young girls. Well, let's just say that this website is not pulling in the kind of dough that architect Richard "Trinity and Neo both die in the new Matrix" Kyanka had in mind while creating this scheme on a three day coke binge. Since teenage girls make up roughly 90 percent of our consumer economy these days, what better way to make it rich by catering to their insatiable appetite for boys and sagely advice? In order to further facilitate our need of experts in this realm, we brought on Tom "moof" Davies, who wrote a charming little piece about space a few days ago. Next week he will be giving out free makeovers to the first 10 lucky girls that e-mail him, and then they will be rated by our panel of gay judges. (Zack Parsons and Livestock). Today you have something very special. We have a totally in your face exclusive with one of the hottest hunks of Hollywood, some awesome gossip about cute boys, teen advice form a husky heartthrob, and some radical crafts! As a promotional giveaway, the first 100 girls that read this article will receive a special Something Awful box of tampons, that are covered in all kinds of crazy colors and plays New Kids on the Block's "The Right Stuff" once it is fully saturated with vaginal blood. It's our way of saying, "Welcome to the new Something Awful!"

Exclusive Interview with Teen Heartthrob Wil Wheaton!
We were lucky enough to nab one of the hottest young stars of today for a one on one interview. Wil Wheaton has starred in a variety of movies like "Stand By Me", and TV shows like "Star Trek: The Next Generation". Recently has was involved in a scandal involving the accidental death of three prostitutes at his posh LA condo, but thankfully has been cleared of all charges. As we sat down for the interview, Wil seemed ill at ease, yet sipping on his rum and coke, and downing a few horse tranquilizers calmed him down. His towering bodyguards removed my belt and took my pencils away, a normal precaution against an assassination attempt against Wil.

SA: So Wil, let's get started. First off, what's your favorite color?
Wil: The color of money! Wait. That's "what movie did Tom Cruise most recently ruin." Sorry about that. My favorite color is something like the color of drying blood on the face of the ignorant in the moonlight, the silver rays reflecting off the crimson puddles. Oh, and before you look at it, it helps to huff a bunch of ether.
SA: Interesting. What's your favorite food?
Wil: Until you've eaten tapioca off the firm flat belly of a whore in Thailand, you haven't lived.
SA: I'm allergic to Thai food. Did you like that gross looking Warf on the set of Star Trek: The Next Generation? Did he smell grody?
Wil: The Wharf smells like fish. Wait. Do you mean "Worf?" He smells like latex, but he's a pretty good guy. If you ever need someone "taken care of," he can do it for like 15 bucks.
SA: Who would win in a fight, you or Dustin Diamond from Saved By the Bell?
Wil: You mean Screech? Did you know that his real name is actually Screech? That's how he got the job. Anyway, we have lunch every Thursday afternoon, and then we fight to see who pays the bill. Let's just say I haven't ever reached for my wallet.
SA: What do you think would be a romantic thing to do on a first date?
Wil: She gives me a blowjob, then we watch Jaws 3, then she gives me another blowjob. Then she makes me a sandwich, and gets the hell out of my house. I have Nintendo to play.
SA: Have you ever had to be nude in a movie or tv show? If so, where can I find it? Tee hee hee.
Wil: Hey! Don't ask me questions like that, you sick fuck! My mom's going to read this!
SA:Why does the comment section on Fark make me want to stab my eyes out and set myself on fire?
Wil: Well, that's a closely guarded secret, but I tell you what: let's go pick up some sluts, get them drunk, and I'll tell you all about it while we're bangin' them.
SA: Did you know that Trinity and Neo die in the new Matrix movie?
Wil: Never heard of it.
SA: Do you think cancer is good or a bad thing?
Wil: Well, what kind of cancer? I mean, if there's a cancer that only affects stupid people, I think that's a good cancer. But you know, cancer is a serious problem, and we should be serious about it, because, like, getting cancer would totally suck. Unless you're a stupid person, because then you probably got cancer because you're so stupid.
SA: Well thanks for answering our questions Wil, and good luck with the rehab!
Wil: Where's my fucking money?

Hot Teen Gossip Gab!
Are you ready for some red hot teen gossip about some kooky cuties? Rumor has it that Kirk Cameron has just finished filming a wacky and fun guide on skin care for classrooms. Not only does he show teens how to avoid getting pimples, he also does a rap about it with a dancing bear! The Coreys are at it again! Corey Feldman and Corey Haim have teamed up once again for a comedy action romp where they have a rad adventure with a talking car, a chimp, and a map to hidden gold. Rumor has it that John Cusak is playing the evil ringmaster and the Coreys totally get in trouble with their parents when they get caught shooting heroin into their testicles. Those crazy guys! Menudo is coming out with a brand new album next week labeled "El crab come mi cara". This will be their 14th album in four years despite several setbacks. Berto was lost in a great hurricane, Ricardo was captured by pirates, and Ricky Martin went loco after eating a bad banana. Last week their manager was gunned down execution style in front of local restaurant. Sources say that witnesses saw the New Kids on the Block tour van driving away, but it hasn't been confirmed. That's all the gab for now, but we'll keep our ears to the ground, and pay off maids to steal secret illicit sex tapes of the stars.

Dear Ernest, I am 14 years old and think I just had my first period. I'm too embarrassed to ask my parents or friends what I need to do. Help!
-Bloody in Boston

Well I don't know much about that period stuff, but I do know some things about blood. When you've killed a man in hand to hand combat, you know the taste, smell, and feel of blood. I once killed a man in Korea with my boot, and was covered in the stuff. The best thing for removing blood is good ole petrol. Just douse that dirty badgerhole of yours with some gasoline to dilute it, and then use some high grade steel wool for removal. Once you clear all that muck outta there, stuff some napkins in so you won't attract bugs or rats. Once you got a rat's nest up in there, you got a whole other problem altogether.

Dear Ernest, I am 15 years old and need your help. After a football game I made out with the quarterback under the bleachers. I'm afraid that I'm pregnant now, but if my parents found out they would be really upset. What should I do?
-Knocked up in Knoxville

You're in luck because I know a lot about this subject. Whenever I bang one of my various girlfriends, I don't like to wear a rubber because it robs me of the full pleasure, and I feel it's an insult to my manhood. This usually results in the broads getting knocked up and begging me to "give them some money", or "help raise the baby". This is unacceptable, so they take a trip down a flight of stairs, taking care of the problem stirring in their womb. A good kick can do the trick, so ask that quarterback of yours to have his team's punter give you a good whap in the belly. This will take care of the baby and you won't even have to tell your parents what a filthy slut you are.

Dear Ernest, I'm fat! I'm 12 years old and almost weigh 100lbs! How can I ever look like Britney Spears with this flab hanging off me?
-Lardass in Louisiana

Stop eating so much you goddamn hippo! Ha ha, but I kid. I think there is a program called bulimia that has been really successful in curing fatness in young girls, but I'm not really sure what's all involved with it. There is also something called liposuction. It's a really easy process where they stick a hose in you and suck out all the lard. I'm going in for my 4th one next week. With these two things you should be 75lbs in no time! Glad I could help kid!

Krazy Krafts: How to make a Scott Baio mask.