A joint Russian and American research team of atheists has defied the supremacy of a divine creator once again by discovering another synthetic and highly-unstable heavy element for the periodic table. This discovery was not one of those "Eureka!" accidents in a chemistry lab. The 117th was discovered by spending 70 days shooting calcium atoms at berkelium atoms. Sure, sounds like a 70-day thrill ride, but the resulting six atoms of the new element only lasted for a tiny fraction of a second.

After a lot of bombarding things that were made out of other bombarded things, scientists had their new element, which they temporarily dubbed ununseptium (Latin for 117-ness). The atomic structure for ununseptium is very elaborate and all that bombarding reminded me of something:

After staring at it for a minute or two I realized it is identical to one of those free shmup games that can only be played by people with crippling autism and the hand-eye coordination of Bishop from Aliens. 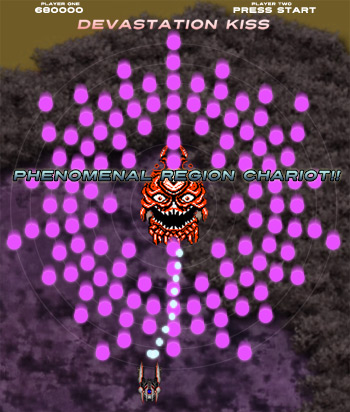 You know you're up to some cutting-edge science when even Japanese teenagers struggle to navigate a Space Brastoid Sakura through its protons and launch a Hyper Cherry Blossom Strike on the boss nucleus. No cheating and using save-states either, bro.

Of course we don't know what ununseptium actually looks like, since the whole "six atoms that last under a second" thing makes them pretty hard to conceptualize. I'm just going to make a guess here and assume that a lump of ununseptium ore would resemble another recent scientific innovation: KFC's Double Down sandwich. After all, what better mimics bombarding pre-bombarded atoms than eating a sandwich crammed between two pieces of fried chicken? 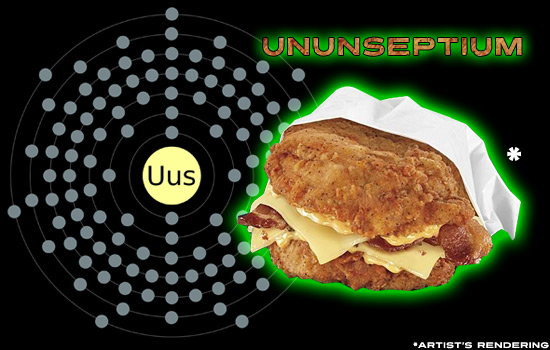 As wonderful as it is, the ununseptium name is temporary, only lasting until the branding geniuses at the International Union for Pure and Applied Chemistry decide on a lasting name. Don't expect much, after all this is the lame trust behind elements like californium and einsteinium. As far as I can tell they pick some scientist from the past or use the location where something was discovered and then attach "ium" to it. Real creative.

How about some elements with balls again? We used to have elements like Hydrogen and Boron. Honest elements that we could all be proud of. Alright, sure, Einstein was awesome. He invented atomic bombs and without those we'd never be able to keep the rest of the world in its place. I'll give americium a pass since it goes without saying America rules, but what the hell is roentgenium named after? A million years from now when we're growing gasoline cats in our sex jets will anyone remember some lame guy named Roentgen? I preferred roentgenium's temporary name: unununium. It's the elemental equivalent of douchebagsayswhat. 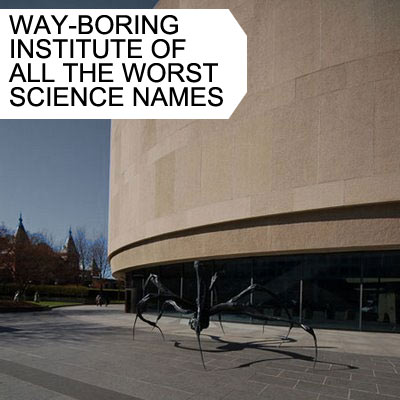 If those boring weenies at the boring International Union for Pure and Applied Chemistry are reading this, I nominate the name mustainium for element 117. It's a bullet-sweating, guitar-flaying tribute to Megadeth's Dave Mustaine. It would be the only element on the periodic table that would cause you to hear the ludicrous licks from Holy Wars...The Punishment Due every time you decide to shoot some atoms at it.

If you would prefer to go political and endorse America's greatest political mind might I suggest googleronpaulium. Every time a few precious atoms of googleronpaulium are bombarded with neutrons to create ununununununium some nuclear physicist might Google Ron Paul. Thus America was saved.