The fast-approaching FIFA World Cup is the second largest soccer event on the planet. Many argue that it would probably be #1 if the United States' Major League Soccer championship game didn't promote itself with the somewhat misleading title of Wrestlemania Superbowl M.A.S.H. Finale.

Every four years, teams representing nations from every corner of the world converge on a new location to test themselves in the most challenging and prestigious tournament the sport has to offer. In past years, the event has been held in: 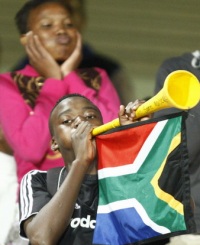 This time around, South Africa will host the event. I'm hoping that this will bring some much-deserved attention to this area of the world - not because of any political or social issues in the region, but because South African fans have abandoned the sport's traditional drumming and chanting in favor of some seriously goofy plastic trumpets that are pretty much the most annoying thing you'll ever hear.

Listening to the announcers broadcast a match in South Africa is like straining to hear a whispered conversation on the other side of a bee-infested testing facility for electric shavers.

When the location of each tournament is announced, every nation immediately rushes a representative to the designated finish line in the host country. The first thirty two countries to cross the finish line make it into the tournament. The remaining nations are expelled from the U.N. and shunned from peacekeeping talks for the next four years.

Teams are divided into eight groups of four teams each. These groups play self-contained round robin tournaments, then the top two teams from each group move on to the next round, where single elimination begins. If a team discovers a warp whistle at any time, they may blow it to advance to the championship game immediately.

What about team rosters? Randomly selected captains take turns picking players from the crowd in the World Cup parking lot on the morning of the opening ceremony.

Some have criticized this process, pointing out that professional soccer players with official gear tend to be picked first, and that there hasn't been a morbidly obese player with glasses in the event's history. Others have criticized the whiny voices of the people who criticized the process. It is unlikely that the two sides will meet in the middle any time soon.

If you've never actually seen a match before, things can get a little confusing. Even if you know the basics (kicking a ball into the opposing goal, everyone wearing shorts, very little shadow puppetry) some elements of the game might fly over your head.

First there's the field, or pitch: 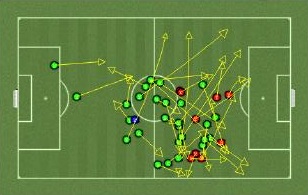 This rectangular surface is typically larger than a fully-grown man. I've never measured the boundaries of an official pitch, but I'd put the dimensions at half a mile by ten or twenty feet. It probably goes down below the Earth's surface a good hectare or so, but for the most part you don't see a lot of players making vertical movements.

Each team can have up to eleven players on the pitch, including a goalkeeper. Why eleven? Everyone wanted to stop at ten, but the goalkeepers kept showing up uninvited and no one really had the heart to reject them.

Aside from the goalkeeper, no player can touch the ball with their hands while it is in play. Legs, chest, and even head are fine but not hands. There is, however, one exception: A note stating that your feet are too sore to kick the ball. Such a note MUST be signed by a doctor or parent.

When something remotely interesting happens, you'll probably notice at least one man flinging himself to the ground and rolling around in apparent agony. In most cases, it will appear as though he has just been shot by an invisible cannonball. Don't panic. You're just witnessing the time-honored tradition of breaking the flow of a game with the intention of getting an opposing player in trouble for an imaginary attack.

If the referee falls for such an act (due to a player really selling the pretend injury by pulling one arm into a shirt sleeve and acting as if it's been amputated), he'll usually penalize the opponent with a yellow card.

In soccer, yellow cards are warnings, telling you to slow down before you really fuck up and get a red card. Let me think of an analogy that involves yellow for warning and red for stop. Okay, let's say you're approaching a traffic light. Suddenly, a referee gives you a yellow card because a guy is on the ground pretending you hit him with your car. You stop to argue, and a second guy intentionally throws himself into your back bumper, then hops around with one leg tucked up behind him, pretending it came off. The referee gives you a red card.

That's pretty much how soccer - and in turn the World Cup - works.