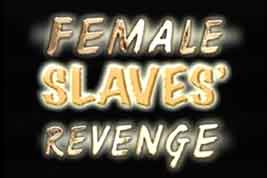 Female Slaves' RevengeOverview: When the slaves revolt and seize an African nation from the grip of their white masters, a group of female slave women put their cruel master on trial by fulfilling his ninety-minute bondage fantasy.

The Case For: Provides an interesting comment on apartheid and the historically unbalanced nature of race relations.

The Case Against: Unfortunately, that comment is, "Ted V. Mikels is a mustachioed sex toilet."

When discussing the oeuvre of an auteur like Ted V. Mikels, writer, director, producer, and star of Female Slaves' Revenge, one tends to make comparisons to other artists, such as Picasso. For instance, Picasso had his "blue period." Ted V. Mikels had his "cat people fetish period." Picasso had his "cubist period." Ted V. Mikels had his "being stepped on by women wearing high heels fetish period." Picasso cut off his ear to prove his devotion to a lover. Ted V, Mikels has a ridiculous moustache. The comparisons go on and on. 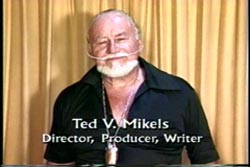 Ted V. Mikels: Renaissance MoustacheBack in 2000, Mikels was thoroughly in the grip of his cat people fetish, which he captured on film in his epic The Corpse-Grinders 2. Four years later, Mikels decided to get out of the realm of films about funeral directors who grind corpses into cat food, which they then feed to a race of alien cat people to refuel their war effort against the evil dog people from the dog people planet. Perhaps he felt he had already left his mark on that genre. Perhaps he couldn't get any of those actors to speak to him again. We may never know. What we do know is that in that time, Mikels developed a social conscience. No longer was he content to allow the cinematic discourse on race relations to be restricted to the Steven Spielbergs, Spike Lees, and Martin Lawrences of the world. No, it was time for the world to hear what Ted V. Mikels had to say. It was time for the female slaves to finally have their revenge!

Ninety minutes is a short time when your heart is bursting with as much passion as the heart of one Ted V. Mikels, so it is hardly surprising that he takes a moment to address his viewers personally before the film proper begins.

"World peace has not been achieved. In this century. And may never be achieved! The film you are about to see is about man's inhumanity to man." 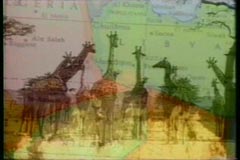 I defy you to concoct an image that sums up Africa better than this. Defy, I say!Well said, Mr. Mikels, well said! With no further ado, the film leaps to life with a lengthy montage of shots of wildlife superimposed over a map of Africa, which is itself superimposed over some fire. A lesser director might use this montage as a background for opening credits, but not Ted V. Mikels! He uses it as a backdrop for nothing. Seriously, nothing. Nothing at all. Just a solid sixty seconds of stock footage of animals, maps, and fire. It is worth mentioning at this time that at no point in the movie other than in this opening sequence are there any animals or maps, and frankly, very little fire.

The animals, maps, and fire are just meant to lull the viewer into a false sense of security, however. Out of nowhere, the music changes and a bizarre computer generated mask flies at the screen! The true nature of the movie is revealed. It's not about animals and maps and fire at all! It's about bizarre masks& and fire. The fire sticks around.

The fire continues to burn at the bottom of the screen, giving a still further false impression of the fire content of this movie, as one of the greatest scrolling text intros in the history of film flies by. The whole introduction is narrated by Mr. Mikels, with all the passion and drama one would use to read off the menu at KFC.

In an unknown country
On the continent of Africa
Unrest has led to
A civil war to win
Freedom.

For many years this tiny
Black nation was suppressed,
Ruled and dominated
By a few white
Racists and slave-traders.

This minority
Ruthlessly held the
Peoples firmly under the
Heel of the boot, and forced
Their bidding upon them.

They were now free of
The bondage that held
Them in their agonies.

This is the fictional
Story of a greedy,
Evil, and murderous
Landowner who refused
To surrender his ill-gained
Wealth and possessions.

When the soldiers of the
New order issue papers
To the head mistress
Of the mansion
Notifying her that she is
Now the queen-ruler
Of the household,
She draws around her
The other nine maids,
Servants and mistresses.

Together, they sieze
And chain the evil
Landowner, and form
A court to try him for
His crimes. They inform
Him that the new order
Has given them the
Power to hold a court
With themselves as the
Judge and jurors
To decide his fate.

Although this story is
Fictional, the events you
Are about to witness
Could actually have
Taken place not many
Years ago.

Amazingly enough, this is not the entire intro. I spared you about half of it, as I am a kind and benevolent movie reviewer.