Greetings, nerds! It is I, Patrick Stewart, soon to be Sir Patrick Stewart. You read that correctly. I am to be knighted by the Queen of England, and granted the limitless power that comes with the title.

Soon I will be able to commandeer cars in the name of the Queen. I will also be able to commandeer your fridge and make myself a ham sandwich if I feel it serves the British empire. I'm pretty sure I'll be able to possess someone's body as well, and subdue their subconscious before I struggle to pilot their arms and legs as they perform dull tasks such as painting my house or organizing my cd collection. My advice to you? Keep your gas tanks full, stock up on ham and clear your weekend schedules, you ponces. 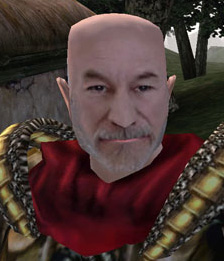 I can hardly wait! My thirties are going to be the best decade of my life. You were under the impression that I was older, weren't you? Ha ha. Yes, well that's because I shaved my head at a young age.

When I took the role as Jean Luc Picard on Star Trek: The Next Generation, I was three years younger than the smartass who played Wesley Crusher and no one was the wiser. You wouldn't believe how often I was able to sleep with older women. I ravished Whoopi Goldberg on the bridge so many times that a cursory sweep of the set with a black light would reveal more nebulous clouds than the Enterprise had encountered during the entire run of the show.

My upcoming knighthood is a reward for the unmatched contributions I have made to the field of voiceover work. It all started when I re-recorded Captain Kirk's lines and had them dubbed over William Shatner's original (and unbelievably non-British) dialogue for the release of the original Star Trek series on dvd. My voice was a hit. In no time at all I was appearing in practically every video game.

As fun and rewarding as the experience has been, something has been missing: More of me. There are many many games out there, and most don't feature me at all! Some were created before voiceovers were possible, some didn't have the budget to hire me, and some games only used my incredible voice for one or two characters. This simply won't do.

Upon receiving my knighthood, I will issue an order that all video game companies shall comply with if they wish to avoid the wrath of the Queen. It will state that:

1. All software titles are to be pulled off store shelves immediately. A game cannot go back on sale until I have recorded dialogue for every single character in it.

2. I will not alter my voice to sound like the character I am portraying, even if it is a woman/monster/cowboy. People want the complete Stewartian Experience. Without it they will feel confused and frightened.

3. None shall enter the Forbidden Zone.

To hold you over until the glorious new era of gaming begins, here are some lines I have prepared for a few games that I'm particularly excited about.

"Back, foul turtle! You have no claim to this mushroom. It belongs to I, Mario!"

"Perhaps I am just a lowly marble, but I know madness when I see it! And I see it!"

"Before you attack me, you should consider my bionic arm and its incredible span. Your head will spin at how far I can reach to grab a phone and dial for an ambulance after you have shot me."

"I, Aeris, have just been mortally wounded by your blade. I suppose this is my final fantasy... urk!" 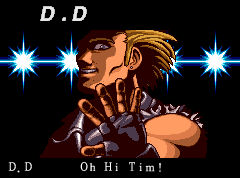 Crackdown
Listen up, agent: a meaningful story have gone missing and there is so much fun gameplay on the streets that you might forget it! 9/10

NBA Street Homecourt
If you absolutely must dunk a ball three times in a single jump on a court where everything you see has been passed through an overbearing sepia tone filter, you should buy this game or the new version of Solitaire that comes with Vista. 7/10

Virtua Fighter 5
We've come a long way since the original Virtua Fighter, as is evident by this year's inclusion of the long-awaited "punch" and "kick" features. 8/10

Wii Play
You may get a "free" Wii controller with the game, but you'd be better off just buying the controller and punching yourself in the penis. 4/10

Jade Empire: Special Edition
I liked it better the first time I played it, when it was called Jade Empire. 7/10

DIRT - Origin Of The Species
When everything else fails (and I do mean everything), slap a picture of a scantily clad woman on the box. 0/10

Supreme Commander
Command thousands upon thousands of units in an epic war, trying your best not to linger on the fact that none of them really love or understand you. 8/10

Starshatter: The Gathering Storm
Um, sorry but we all know that releasing the same game again and again with minor improvements doesn't work in the video game industry. 6/10

Maelstrom
Please tell me no one was actually trying to make a good game, or my laughter may turn to sadness. 2/10

Vanguard: Saga Of Heroes
Soloing may be a pain in the ass along with the lack of instanced dungeons and an old-school death penalty that doesn't actually add any fun to the game, but at least you can craft a lot of stuff and argue with NPCs! 7/10

Close Quarters Conflict
I could make a better first person shooter with a text parser in an hour, and it took me forty minutes just to come up with this review. 4/10

Ghost Rider
Seriously, what did you expect? 2/10

SnoCross 2: Featuring Blair Morgan
I know that we all rush out to buy anything with Blair Morgan's name attached to it, but in the case of this game we've got to curb our collective Morganmania. 2/10

Ratchet & Clank: Size Matters
With lots of laughs and a frightening collection of weaponry, Size Matters is essentially the video game equivalent of a really funny school shooting. 8/10

Lunar Knights
In this politically correct day and age, it's refreshing to see a game come out and take an anti-vampire stance, consequences be damned. 9/10