You're Out of Work, Jerk!

Employer: Say, wanna see a magic trick?
Employee: Uhh… sure, boss.
Employer: Your job! It just disappeared! Pack your things and leave! Pretty good trick, huh?
Employee: But I've worked here for…
Employer: Hey, don't bitch at me buddy… take it up with the terrorists! If you don't like it grab an assault rifle and haul your ass to Kablaualaianstian or wherever! Bye now! Don't let the door hit your ass on the way out! HAR HAR! 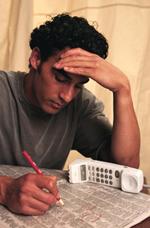 Yes, according to the Federal branch of some department of something kinda important sounding, this all-too-common scenario played itself out over 415,000 times this past month. That's right; nearly a half a million American jobs were lost this past month alone, the most since 1980. And since I was born in 1980 I'll just assume all those job losses were due to nasty rumors about me being the Anti-Christ, which is just plain silly since all I did was vaporize a hospital and spew flames two hundred feet into the sky, igniting the clouds and causing hellfire to rain down upon the city for three consecutive days in early January. It turned out to just be a bad case of influenza.

Getting back to the 415,000 lost jobs: after some extensive research involving Google image search and the backs of cereal boxes, I've managed to conjure up a list of the top professions affected by the October job cuts.

When the "New Media Economy" was at its peak, these people flooded out of the coffee houses in droves to wear turtlenecks and sit around cubicle-filled offices in fancy chairs with free exotic cola holders to "evangelize" all sorts of stupid Internet bullshit. If you asked one of these guys how they were doing, they'd respond with something like "Great! We're cultivating and enabling a sticky, key demographic community of multimedia hits directed with interactive online broadband hub portal using a three-tiered pyramid system of driving traffic towards our main action item metrics with user-base harvesting by skyscraper ad unit push / pull technology e-commerce virtual 3D worlds!"

Back to beating on your bongos and lamenting about "the man," you goateed goops!

I kind of feel sorry for these guys, since thousands of them were laid off due to racial profiling and a nervous upper management. Now most of these people weren't dangerous or anti-American by any means, but the way they said things like "TRASH. HERE!" and shuffled about, eyes scanning the floor for scraps of paper while mumbling under their breath angrily in their native language… well, it was just enough to make people panicky and ill at ease. So these people were quietly laid off and it was blamed on the decline in tourism or advances in cleaning robots or whatever.

With all the scrutiny being placed on airport security, these dirtballs just had to go. These were the people who chatted excitingly with each other while they were supposed to be viewing the contents of people's luggage going through the X-ray machine. They'd be laughing and saying things like "girl you so crazy" while people wearing "Ask Me About Suicide Bombing" t-shirts smuggled in killer kites and the like. They'd also say things like "sure, you can bring that shotgun shaped package on board as a carry-on, keep on keeping on brother!"

Yes, even the normally recession proof music industry was hit hard by job cuts. Over 25,000 hard of hearing or completely deaf rapper sidekicks lost their jobs in October, including veteran luminaries such as MC D-Tone and Heavy Harddaherr. For the unenlightened, listening-challenged musicians are required by law to be present in at least two tracks of every hip-hop album released since 1986. They're the guys who say "what?" or "who dat?" or "aw yeah aw yeah" or "where you at dawg" (some of these deaf rappers are also blind or wearing really dark sunglasses) at random and usually inappropriate intervals. As a result of the layoffs, you'll be hearing only minimal amounts of "can I get a what, what," "true dats," and the classic "what?" in future hip-hop releases, which will free up more room for anti-homosexual tirades, tales of busted caps, and laments over the increasing difficulty of "pimping."

As you can see, these massive job cuts have hurt our nation's ability to waste money on stupid things. However, since I'm one of those "stupid things" I'm out of a job too and licking walls for nourishment. So somebody fix the economy so I can drink the finest Champaign and dine at fancy French restaurants once again, since I am obviously a man of culture, class, and social graces. Thanks a lot, slopwads. 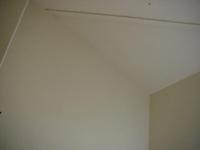 A picture of the ceiling in my apartment. And people say the Internet is boring and full of worthless repetitive garbage!

At this point in my existence, I should be giving some hard thought as to my priorities and goals in life. I should be trying to figure out why I'm unemployed, lazy, openly despised by women, afraid of going outside, poorly educated, rude, fiscally retarded, and generally a miserable excuse for a human being. Instead, I spent most of this week trying to figure out why the hell I've wasted hundreds and possibly thousands of dollars for the privilege of having high ceilings in my apartment.

High ceilings make your living space seem more luxurious, spacious, open, and less cramped. But they also make you feel short, insignificant, and have probably contributed to lowering my already almost non-existent self-esteem. The only thing I really like about high ceilings is the ability to throw stuff into the air when I get mad and not having to worry about it immediately hitting the ceiling and crashing back down upon my head. You can throw balls against the high walls and play "lonely loser baseball" if you're bored, but since the corners of high ceilings are often populated by huge five-foot gobs of spider webs this probably isn't the best idea.

Perhaps these ceilings are a poignant metaphor for my station in life: instead of climbing to the top, I sleep on the floor until two in the afternoon. Oooh, that's deep.

He Has Two First Names!

For your viewing pleasure, here's a bunch of pictures of former Washington Redskins quarterback and all-around failure Jeff George. Click for the full-sized wallpaper. Enjoy! 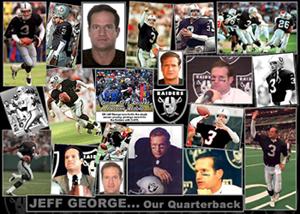 Throw a touchdown pass and then perhaps go for a two-point conversion if you think it's worth the risk, Jeff!