Our Favorite NFL Criminals During the Upcoming Strike 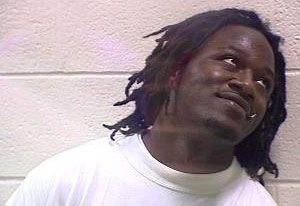 Past crime: Beating multiple people including a stripper, causing a ruckus, spitting, causing a multiple shooting.

He's on a regimen to really be Pacman. He covers his house with pictures of Pacman. He looks at himself in the mirror and he says Believe it you're the best. You are the best Pacman. This is it. They need you now, Pacman. He pumps up listening to Pacdance the Pacman raps he records freestyle in his gym between Pac-katas. Lifts weights and eats the right food. High protein, high fat, whey and ice cream shakes. Jumps down funnels. Rolls in tubes.

He calls a health line. Hello, this is Pacman. How do I be Pacman 24/7? What do I eat to make myself a better Pacman?

They don't have the answers. GNC doesn't know shit. Nobody can tell him what to be, but he makes himself Pacman. He's more and more ball. His mouth is bigger. Wedgier. He's feelin' it now. Routes on the property with yellow painted basketballs. Has his friends wear sheets and chase him in a corn maze. He's getting' there. He's doin' it. This is for real, son. For real. If you don't believe the pellet don't even step out on the screen.

Things just get out of hand. It's about the fruit. The pellets and the fruit. Sick of basketballs. He's so yellow. It's time to show this world what I'm made of he tells the bus driver who drops him off at the mall. When you think about it, he says to god, society is the maze. Let's roll.