Hey, Wouldn’t It Be Funny If We Millennials Voted For Trump Ironically? By Donald Trump Jr. 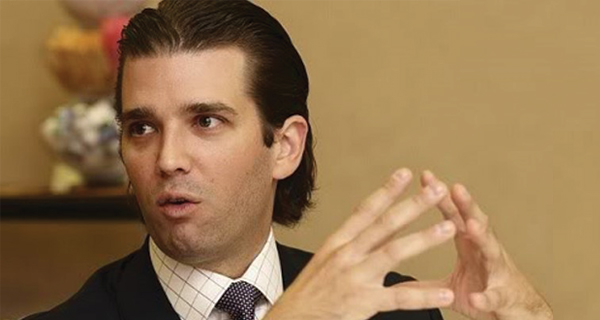 OK, OK, uh, hear me out here, everyone. We all like comedy, right? Mad TV, John Candy, Caroline In The City? Well, here’s an idea for a wonderful joke. I know this may sound “crazy-cray,” but...

Wouldn’t it be the funniest thing ever if millennials united as a voting bloc to elect my father as the 45th president of the United States?

Personally, I cannot think of anything funnier than registered voters aged 18-35 voting for a “rude dude” like my father, Donald Trump. Think of all the laughs you will have when telling your grandkids, “I voted for the guy from Home Alone 2 AND The Apprentice!”

“And then he ended up saving America!”

Yes, there are plenty of “LOLs” to be had upon pulling the lever for my father. Put your ballot on Snapchat to “razz” your conservative friends, perhaps with the caption, “Look how dumb this is!” You could use ironic hashtags such as, “#Voted4Trump4HumorPurposes.” You could even text a ballot selfie to your liberal grandma, should she still be alive, and write, “Hah, hah, granny! I love you!”

Yes, there are 3 whole reasons voting for my father, Donald Trump, is funny. Let’s all do it today, via early voting...as a joke!

Now I know what you are thinking: “Hey, no need use laughs to persuade me. I’m a millennial who genuinely supports Donald Trump.” To which I say: I can understand why you would! Donald Trump is very woke. He believes that men should be allowed in beauty pageant dressing rooms regardless of their gender. He promotes the sexual health and fitness of all his female employees. And he is very good friends with Ben Carson (a black.)

However: millennials like myself and Scott Baio are in the minority when it comes to supporting my dad. Youths are breaking for Hillary over 2.5 to 1, perhaps due to their low energy.

So I come to you with this, a pitch towards the mirth/humor space. Imagine how funny it would be if Mr. Trump — I mean, my dad — were to win the White House. It might be reconcepted as “The Orange House,” am I correct?

This is the kind of fun, relatable humor you can safely engage in once my dad is your president!

So, if you utilize traditionally left leaning social media platforms like Tumblr, your choice is as clear as the clothing on radical progressive Miley Cyrus. Vote for Donald J. Trump, and Make America Laugh Again, And Then, Great Again!