NARRATOR: But Jonathan never cancelled his subscription. Hours later he was still playing, and posting on the forums.

DAVID MILLER, Director of Internet Aggression Research, Univ. of California, Irvine: They never ever cancel. They get this idea into their head that by threatening to cancel a representative from the company is going to rush over to their house and beg them to stay. It's ridiculous behavior.

NARRATOR: Though Melian experienced a typical change of heart, others continued to verbally abuse Blizzard Entertainment staff during the patch discussion.

NARRATOR: We showed transcripts of the druid discussion to the leading psychologist at Indiana University, Michelle Willbanks.

MICHELLE WILLBANKS, psychologist, Indiana University: Melian and others like him believe, and wrongly so, that the designers of this video game deliberately set out to ruin his experience, and he acts according to those beliefs. The kicker is, when he finally did play the game, his experience was not ruined, and he continues to play.

NARRATOR: According to a study conducted in 2006 by Willbank's research team, 98 percent of players who publicly threaten to cancel do not. The remaining 2 percent return within 3 months. An astonishing 97 percent of players that do cancel their War Craft membership, have never posted on the official forums.

ANONYMOUS BLIZZARD EMPLOYEE, voice disguised: And why would they cancel? *laughs* These losers have nowhere else to go.

NARRATOR: A Blizzard game designer agreed to talk to us about nerd rage under the condition of anonymity.

REPORTER: What is your reaction to such hateful messages that are posted on the official Blizzard forum? 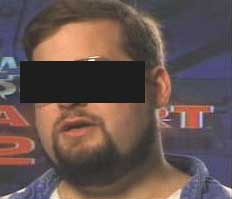 ANONYMOUS BLIZZARD EMPLOYEE: I laugh. These guys think that there is some vendetta against them, that every decision we make is meant to piss them off. And you know what, they're right. Everybody at Blizzard is laughing at these guys. From the programmers to the GMs, right up to the CEO of the company. I've had the opportunity of talking to some top people in management, and they have no respect for anyone who plays this game.

REPORTER: What do they think of the players?