My cold and bitter heart has been warmed - not by love or the sight of a panda nursing a human baby, but by a ten foot tall orc with a cockney accent volunteering to be loaded in a catapult and flung toward the broadside of a distant fortress.

The Warhammer Online open beta has been the most rewarding experience I've had in an MMO since passing out while camping a spawn point in Everquest and waking up to find an uneaten jelly bean under my desk. There's no monotonous grinding of levels or hoping for greener pastures in an endgame that ultimately turns out to be another treadmill. From level 1 I've able to team up with like-minded sociopaths in Goon Squad and take on swarms of opponents in world PVP and scenario maps, knock pesky healers off of very tall cliffs, and type /fart to see what it does while other people my age are getting married and settling into actual careers.

Warhammer Online isn't a perfect game (only Chris Hope Football Simulator 2005 holds that distinction), but it has a terrific sense of humor, gets PVP absolutely right, and adds lots of bits to PVE that really should have been there all along. The only problem? Choosing a main character to stick with when the game is released next week. There are tons of careers to choose from, and they all offer something to set themselves apart from the standard Tank/DPS/Healer roles we're accustomed to.

Marauder
Melee damage dude with a Swiss Army mutant arm that can turn into all sorts of goofy stuff. Want to do single-target damage? Sword arm. Want to do area-of-effect attacks? Mace arm. Want directions to the nearest gas station? Hand arm, with fingers. 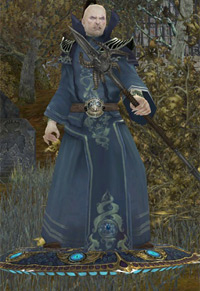 Chosen
A tank with the most badass armor in the game, several knockdown abilities, and a ton of useful auras that can turn the tide in a battle if used wisely. Also has an aura that drains all of his life instantly, which is very difficult to use wisely.

Zealot
A shirtless tattooed dude that carries a skull around in his left hand at all times. Stores the negative attention that he feeds off of while skulking around the mall and converts it into power that can heal and buff his allies.

Magus
A ranged spellcaster that hovers about on an intricate collectible plate and summons pets that cannot move, lest they break said plate. He appears to be very weak in the early game, but I've heard that he makes up for it by remaining just as weak later on, saving you from being startled by any sudden changes.

Squig Herder
Though he wields a bow and spear, the Squig Herder is a pet class whose real weapon is, you guessed it, feminine charm.

Black Orc
A lumbering, violent doofus with skills such as "Right In Da Jibblies", "We'z Bigger", "Not In Da Face" and "WAAAAAAAGH!". In other words, the thinking man's Vinnie Jones.

Shaman
Every consecutive offensive skill that the Shaman casts makes his next heal more powerful, and vice versa. This playstyle is often described as a seesaw act, due to the seesaw's reputation as the most powerful piece of spellcasting playground equipment.

Rune Priest
A priest that drinks beer and tries to heal his friends by throwing rocks at them. Or so he claims.

Engineer
The king of gadgets, the Engineer has all sorts of tools at his disposal that can trip up the enemy. The latest addition: a "Gaming iPhone" that causes all opponents to laugh, immobilizing them for twenty seconds.

Witch Hunter
With a pistol in one hand and a sword in the other, every time the Witch Hunter steps into battle he's playing the world's deadliest version of "pat your head and rub your tummy".

Warrior Priest
Wielding a sledgehammer, this melee class heals his own party by wading in to the fray and attacking others. Perfect for fans of political talk radio.

Bright Wizard
Casts fire-based offensive spells that are so powerful he actually hurts (and often kills) himself. Not to be confused with the Light Wizard, who casts much less effective spells at the cost of an eating disorder.

I hear there are more careers in both Order and Destruction for elves, but my conscience won't allow me to click on them.