The McCain Ascendency by Robert Ludlum 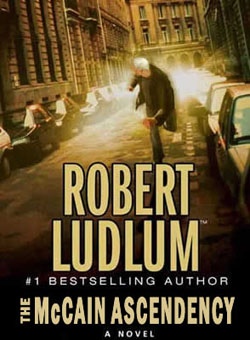 The room was silent for a time. A Department of Defense undersecretary cautiously took the bait. "Barack Obama. He would have been, what, six years old?"

"Barack Hussein Obama Senior, obviously." Ramses was pleased that someone had fallen into the trap, and allowed himself a moment to savor it. His position in the SCIA allowed him few opportunities to throw his weight around, given that most of his colleagues, even those in the intelligence community, thought he was nothing more than a mid-level Pentagon bureaucrat. Consequently, he wore his authority with the awkward swagger of a boy in his first suit. "Also born 1936, Kenya. Brought to America under SCIA Operation Grabfrica, 1958. Also trained extensively in tactical combat operations. Infiltrated left-wing circles at Harvard University in 1961; defected to East, 1962. Last known whereabouts: Hanoi, North Vietnam."

"I'm not putting this together, Mark," said Harold Bass, acting director of the CIA. "You mean to tell me that John McCain was sent to Vietnam to kill Barack Obama's father?"

"But he never did. McCain went maverick, decided to play the mission on his own terms. He befriended Obama in that prison, instead. To the best of our limited knowledge, Obama died in Afghanistan, 1982. McCain was jettisoned, turned over to the VC, and upon his return to our soil, deprogrammed." Ramses glanced around the room, surveying the incredulous stares. "Fully, brutally deprogrammed. I was there, and I'll be goddamned if it wasn't my finest work."

"If you're so confident in your skills, then," Bass advanced, "what's the problem? As long as McCain thinks he's a boyscout POW Navy jock, which we all know he does, Project Blackstar is secure."

Ramses bristled. "It's not my skills I don't trust," he hissed. "If it had been up to the SCIA, McCain would be dead. Your pantywaist predecessors at the CIA wanted him deprogrammed, so I did my damndest. But they had a cockamamie idea they might need him again, despite the fact that he betrayed his goddamn country. They made me code in a safe word. He hears that word, it all comes rushing back, and Project Blackstar is finished"

A low murmur filled the room. "Is there any reason to believe this safe word has been compromised?"

"Two weeks ago, the SCIA network was accessed for three-point-five seconds by an unauthorized machine. Our boys put it somewhere in the neighborhood of Tbilisi, Georgia. One file was accessed. The file was unencrypted, and it contained one word: Baltimora. If that word is spoken to John McCain, he'll suddenly be host to some very dangerous memories. For example, he'll remember Barack Hussein Obama like he met him yesterday. He'll remember that Barack Hussein Obama was a fascinating man, a man who told him more about the inner workings of United States intelligence than anyone in this building ever did. A man who told him more than any citizen needs to know about the secret history of this nation. And I'll tell you one thing he'll damn well remember instantly, a thing that will put Project Blackstar right into the gutter."

Bass was annoyed at Ramses' amateur dramatics. "Out with it, Ramses."

"He'll know for goddamn certain that Barack Hussein Obama never had a son."