Don't Bother Asking Me No Poll 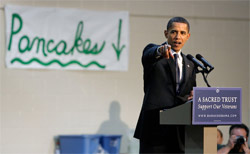 I think this is the Arab guy.Them polling people called up last week and asked me which person I wanted as President and I told them the same thing I’m fixin’ to tell you: I ain’t got no idea who I’m votin’ for. Only just now put on the TV and saw there was some sort of election thing happenin’. Some convention parties or somethin’ goin’ on and balloons and stuff.

I don’t even know who it is. This guy Obama and this McCain feller. I think I heard of the McCain one, but I don’t know. Is he the one with the blimp? Harold at the Blockbuster Video said he was good. The blimp guy, I mean. I don’t know if that’s McCain.

And then is the other feller a Mexican or an Arab or somethin’? I was gettin’ my hair cut and I saw his picture on the TV but they was runnin’ the blow dryer and I didn’t hear what they said. And there’s lady talks like the Nanny and the old squinty guy with the white hair, who are they? Are they the other party or what? Eh, I don’t know. 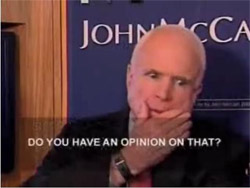 Blimp guy??? Maybe??? Wants gold coins?????I registered independent. I used to be a Democrat but then I read a while back the Democrats wanted us to lose a war or somethin’ and that is just damn shameful. But that was awhile back so I ain’t gonna blame whichever one is the Democrat for it this time. Nope. I got me an open mind on this one.

The main things important to me is the economy, change, Iraq, and national security. I also want lower taxes and universal healthcare. I don’t really trust that Arab guy on the national security, cuz what if he is one of them? I saw an email my cousin got said the Obama guy I think won’t do no pledge unless his hand is on a Korean. I don’t even know about that but it sounds weird.

On the other hand, I don’t think the old guy knows about no change or economies. I heard he lives in seven different house and got his self a rich wife he married from Alaska.

Education is important to me too. I don’t want nobody tellin’ me I gotta teach creationism and especially not when I’m home schoolin’ my kids. The Bible ain’t got no place in my room where I set up a dry erase board and teach my baby girls about dividing stuff. 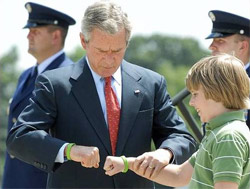 I know this one. This is the old President ain't nobody likes no more.If only I could get me some vouchers so I could afford to get that Ten Commandments statue moved out of my front yard. Previous owners left it. Thought they was cute or somethin’. I covet who I damn well please!

And ya’ll see them cranes fallin’ down? Which one of these so-called presidents gonna take care of cranes fallin’ down? Musta been 100 cranes fell down over the summer. I ain’t seen no white paper on that. Give me a URL I’ll plug that into my computer and look at that sometime.

Iraq is important to me, like I said. What’s important is we start bringin’ our boys home in victory as soon as possible. It was a war we shouldn’t have gone into in the first place, but now we’re there we messed it all up and we gotta fix it and honor our sacrifices by winning. So shit yeah I support the troops. I support ‘em by bringin’ ‘em home in victory.

My opinion on gay marriages is pretty complicated. It’s fine if ya’ll marry whoever or whatever ya’ll want, so long as I don’t have to hear about it when I’m tryin’ to eat dinner. They had a guy on a TV married his own sister in some foreign country and that is exactly what I don’t want to see gays doin’ here in America. Keep it to yourself and let the states decide. Marriage is between a man and a woman who ain’t his sister or a dog. Or two women. And don’t put no dudes kissing each other on the mouth on the TV. 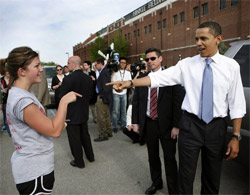 Why is he always pointin' at people? A little elite if you ask me. Like a commando.The very single most important thing of all to me is change. This is a change election, so I think we gotta get the bums out. I’m sick of the guy in there. Eight years is enough. Now I know one guy ain’t from his party, but I heard the other guy is a maverick. So I don’t know. One guy is new and we ain’t had an Arab president before, but then on the other hand that other guy (Mitt Huckabee??) was a POW in Vietnam and he’ll be the oldest president which is also a first when you think about it.

It’s a hard decision. Does the Arab got the experience to make the change I need? Does the guy who got tortured only he don’t call it torture under the new torture rules have the maverick heart to reform Washington? Where did Hillary Clinton go? I was watchin' one day and they said she won South Dakota and then she's just gone. Anyways, I don’t know yet. I ain’t made up my mind.

Aw, you know what? To hell with this. I’m votin’ LaRouche again.