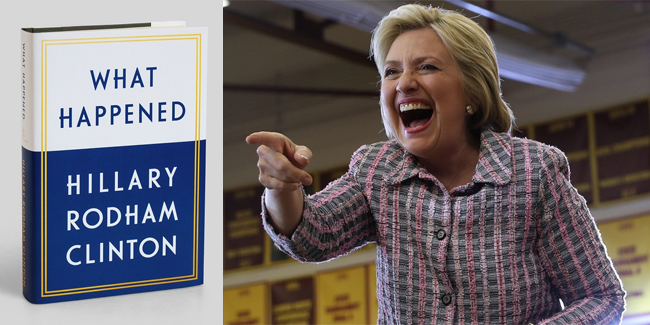 Donald Trump walked around too close behind me in the debate making sex grunts.

Untamed super predators ripped my flesh with their wicked talons.

The people I wanted turned into craters when I was Secretary of State failed to establish a stable liberal democracy in their lousy Craterstan, thus making me look bad.

The weird guy nobody was supposed to like started giving people ideas about stuff other than tax credits and endless war.

The Bernard Brothers Online who could not stand to see a woman president be the one to drop the world's biggest conventional explosive on Afghanistan like I wanted to do before Trump stole my idea.

Online harassment (really bad so in here twice) of women by screenshotting things they say on twitter and then adding "lmao" which is hate speech. Twitter does not ban users who do this quickly enough, it can take up to 6 hours if you do hate speech on Neera Tanden by saying "ur dumb" and by then the damage is done and people know she is dumb.

R*U*S*S*I*A!!! Even though half the people on my staff think Russia is still the Soviet Union and not some fucked up mobster country, trust me when I tell you that Russia ruined this for me. If anyone is to blame for this election it is Putin.

Or Barack Obama. He refused to let me release my oppo dump on Bernie's son being born out of wedlock. This tied my hands all the while Bernie kept painting me as corrupt just because the actual Goldman Sachs was awakened from his centuries of slumber to officiate my daughter's wedding to Hedge Fund.

Joe Biden, that dumbass, dragged his feet dropping out. Yeah, we get it, your son died. Boo hoo I've got an election to win here. "What Beau would have wanted" is you to elect Trump? Well, congratulations.

Robbie Mook is even stupider than Joe Biden. He kept reading all the polling graphs upside down and would sit in on conference calls doing a fake Irish accent character who would second whatever he said. "Oh, I think we need to spend more money on mailers to Bushwick" or "I think we should spend 2 million dollars on a Vimeo video where you dab and target it to North Carolina Latinos visiting a Luchadores website." Absolute moron.

A big "fuck you" to Wisconsin, Pennsylvania, and Michigan! Oh, sure, you'll vote for the black guy twice but a white woman? These three states are misogynist now and officially on my shit list.

Wikileaks. Where are the Bernie emails, Julian? How did you get those pictures of my tail? It's vestigial and not a "full devil tail" like you claimed.

Also I might have done some things I guess. But whatever. Too late now.