Who Ya Gonna Call? Verizon Wireless. 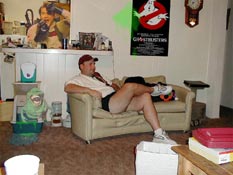 Expensive outsourcing is not the most cost effective option for ghost removal.I spend a good portion of any day quivering in a ball in the corner, sweating like a hog, and pissing myself whenever my bladder permits it. This isn't due to some weird physical condition; it is caused by my overwhelming fear of ghosts. Wraiths and apparitions torment me constantly, emerging from such exciting household items as closets, ovens, pirate chests, coffins, coffins disguised as ovens, and also sometimes the TV when I'm watching shows about ghosts. Any time I'm talking to a pretty girl a ghost appears out of nowhere and starts causing me all manner of trouble. Once a ghost possessed me and I committed bestiality.

This isn't a pointless confession. I needed some exciting grounding for my exciting announcement that I read in the exciting Yahoo News section on the exciting web site of excitement: yahoo.com. Apparently cell phones are killing ghosts.

"But with the introduction of mobile phones 15 years ago, ghost sightings began to decline to the point where now we are receiving none."

Ignoring the fact that these two quotes from the same person contradict each other and basically make no fucking sense, I was incredibly happy to learn that if I weren't Amish I would have the means of destroying a ghost in my very own home. I immediately removed my beard and began shoving other Amish types into barns or wherever they belong and renounced my Amish roots. Then I bought a cell phone, because I am on the front lines of this war on ghosts and I have to be prepared.

Unfortunately ghosts are not the only menace in my life. There are a number of factors contributing to my fragile mental state, but since the ghost epidemic was so easily cured, why not turn my attention to some of these other problems. Solutions I sought and solutions I have found! Read on gentle reader and read carefully for there is much valuable information to be read.

Retired Reds Catcher Johnny Bench - Every morning I would wake up to him squatting at the foot of my bed as if I were about to launch a fastball at his center mass. He just stared at me with those dead eyes of his when I recoiled in half-conscious terror, then he would start laughing. I tried wearing cleats to bed but that caused real problems whenever the hookers slept over and did a number on my tiger pelt comforter. Then I read on a Geocities web site that Bench is susceptible to the high frequency oscillation of the pistons inside diesel submarine engines. Six months and 800,000 dollars later and my bedroom looks like the engine room of a German U-Boat. I've gotten used to the grease stains, fuel fires, constant maintenance and depth charges; it was all worth it to be rid of that accursed beaming rictus of Bench.

Dinosaur Burglars - I don't know a single person on my block that hasn't been burglarized by dinosaurs. They stampede in the dead of night to your windows, then stampede through your wall and take anything of value, then stampede back out. In less than five minutes most of your valuables will be gone like the noble buffalo of the Great Plains. I had tried everything and I had pretty much given up hope. That is, until I heard from a fundamentalist Christian on Art Bell's radio program that dinosaurs weren't real, that evolution was completely fraudulent, and that human civilization was barely more than a few thousand years old. I immediately purchased a large red bible and placed it where all dinosaurs attempting to plunder my home could clearly see it. I think it goes without saying that dinosaur robberies are down a hundred percent in my household. 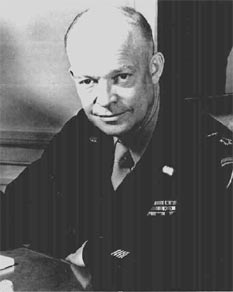 Eisenhower wasn't a bad guy, but give those photos an inch and they'll take a mile.

Photographs of Dwight D. Eisenhower - Eisenhower, how I hate your photographic reproductions! You are so glossy and smooth like the coat of a predatory jungle cat or the flawless skin of a giant squid, prowling the uncharted abyssal depths where no man dare go. I dare go there now! I dare stand up to your tyranny foul abomination and I say thee nay, get out of my sight! I am empowered by my new Panasonic electric can opener, which will banish your ominous presence from my Time-Life collector's magazines and well-worn books about Operation Overlord. Flee in terror filthy spawn of hell and may others have mercy on your moiré pattern inducing soul, for I will not.

Kids on Roller Skates - Nothing greases my nether sphincter for tactical deployment like a kid on roller skates. I have shat myself on many occasions when hearing their grim clacking on the sidewalks of my otherwise quiet Ohio town. It turns out that if you purchase rollerblades and throw them at the children on their accursed roller skates they will be lured into abandoning their previous spine-tingling locomotion. I've seen it work folks, so if you too are plagued as I was, then take heed.

Zeppelins - Who doesn't live in fear of zeppelins? They used to raid our cities nightly, modern day pirates of the sky dropping their deadly bricks and small bombs on unsuspecting civilians. But then their day in the sun began to wane in the early eighties. Is it any coincidence that the Clapper was released in the early eighties? Do your part to help prevent the re-emergence of zeppelin gangs; purchase as many Clappers as you have light sources in your home, apartment, office, or house boat. Remember that each time you clap on or clap off, you are really clapping for the right to live in a society free of the oppression of the zeppelins.

I have a lot of other problems in my life, most of which aren't covered by simple banishing household appliances. I really can't stress that enough. Please, someone make an appliance that obliterates this soul crushing loneliness that has turned my heart into a blackened heath of despair. Failing that, maybe something that will banish a plate of pancakes before Hungry Jack gets a hold of them. Like he needs more pancakes.