If there is anything to be learned in this life, it's that there's no such thing as a free lunch. This is true even if you're a bum and some rich guy comes up one day and buys you lunch, because he'll probably expect to hear some of your bum tales and then he'll go back to the office and tell everyone about how he charmed a "quaint little bum," and before you know it, the rich guy has stolen your bum tales and is passing them off as his own. Then someone overhears that guy and passes the tales off as their own, and so on, until one day your best homeless friend is telling you an all-too-familiar story. Well no way, Chester, it was me who once chased Eddie Murphy down an alley, not you. 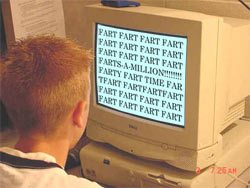 Nowhere on the Internet does this free lunch logic hold more true than at Wikipedia, the free encyclopedia anyone can edit. Sure, it's monetarily free, but it costs you heaps in credibility and accuracy, as well as the time spent combing over information for instances of "jason is a faggit" and other assorted such delights hidden mid-paragraph here and there. Not to mention the incredible amount of useless information that nobody would ever need, as well as the self-important administrative body that comes complete with the wildest God complex this side of Waco.

But wait, if it sounds like I'm hating on Wikipedia, I don't mean to come off that way. I love Wikipedia. It's by far the most entertaining open-source project to ever exist, and yes, I am counting LInux and all of the LInux User Group online photo albums it is responsible for. You see, there are games you can play with Wikipedia. Fun games that you can pass hours upon hours with. I'm not talking about hiding a clue to the supposed sexuality of your high school nemesis in the article about Lieutenant Worf. A nondestructive Wikipedia game was invented last year by my good pals Dr. David Thorpe and Street Cactus, and I have to say that it blows that pedestrian-ass googlewhacking right out of the water.

The premise is quite simple. First, find a useful Wikipedia article that normal people might read. For example, the article called "Knight." Then, find a somehow similar article that is longer, but at the same time, useless to a very large fraction of the population. In this case, we'll go with "Jedi Knight." Open both of the links and compare the lengths of the two articles. Compare not only that, but how well concepts are explored, and the greater professionalism with which the longer article was likely created. Are you looking yet? Get a good, long look. Yeah. Yeeaaah, we know, but that is just the tip of the iceberg. (We're calling it Wikigroaning for a reason.) The next step is to find your own article pair and share it with your friends, who will usually look for their own pairs and you end up spending a good hour or two in a groaning arms race. The game ends after that, usually without any clear winners... but hey, it beats doing work.

We go Wikigroaning on the SA forums from time to time and feel confident enough to share the fruits of our latest outing with the public. We're pretty proud of some of these. Enjoy!

Paper
Company
The Office (US)

Trail of Tears
Tears for Fears

List of people who have disappeared
Characters of Lost

Now you've got it! You're well on your way to starting Wikigroaning clans and clubs in your school, city or prison. If you find a really great pair, you're welcome to send it in, or if you have a forums account, just post in that big ol' thread. And thanks to everyone who participated in showing us the light, you're all honorary Wikipe-tans in my book!