The Wire HD Remaster Has Some Problems

The new widescreen HD remaster of The Wire sounded like a safe bet, given series creator David Simon's close involvement with the conversion. Did you catch last weekend's marathon? Some of the changes struck me as odd, but I want to run them by you guys to make sure I'm not overreacting.

We'll start with the obvious. Every scene is now presented in a drastically tilted dutch angle, even the opening and closing credits. Honestly, I don't mind this decision. It lends the show an air of edginess and legitimacy that it was lacking.

I did, however, find the new hardcoded French subtitles a little distracting. Perhaps Simon and HBO went too far by placing the text in the center of the screen. In an enormous version of the Diablo font. Outlined in billowing animated flames. With accompanying sound effects.

The laugh track is a completely unnecessary addition. Sorry. It just is. You'd think it would be less jarring by virtue of only showing up in scenes featuring Bubbles, but somehow that makes it even disorienting and downright surreal.

There's a classic sequence in which two detectives investigate a crime scene, communicating solely through the use of the word "fuck" with different intonations. Did this amusing scene really need a picture-in-picture overlay showing the faces of modern teens reacting?

The Councilman Carcetti plotline is completely different now that actor Aiden Gillen's performance has been replaced with poorly cropped clips of his Littlefinger character from Game of Thrones. 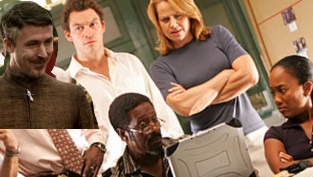 Actual scene from the HD remastered The Wire.Look closely the next time there's an establishing shot of the show's housing projects. There are at least three times as many Dewbacks and Stormtroopers as there were in the original version. With all due respect, Mr. Simon, no one believes that waterfall in the courtyard is real.

In every episode McNulty shoots three uzi-sporting German thugs, minimum. Is that new? I think it's new.

The central conflict between Stringer Bell and Avon Barksdale has been completely changed. Now the duo gradually come to clash over who has the better name, with each man insisting the other is clearly the winner.

The show's structure was originally measured, slowly revealing its layers and welcoming viewers to take a literary approach to piecing together its themes. Now each episode is self-contained, with titles based on case names such as The Serial Selfie Killer and Detective Kima Solves North Korea.

The final season has been broken up into three seasons, culminating in a massive cgi assault on an elven castle.