As some of you know, from time to time I like to take a break from being a failure to those I know and love to spend a few minutes projecting my failures on others. Welcome to the first Page of Shame of this year, where I'll be mocking a small handful of the images submitted that disappointed me to no end. I would like to thank the authors of these images for not being very good at what they do, and I politely ask them to stop being so terrible. Please stop being so terrible.

Purgatory Glory made this charming image that probably took zero effort, and somehow looks like he spent a lot of time making it this ugly. Plain and simple this image goes beyond being a mere waste of time. It's such a waste of time that it's like hailing a taxi on the long march towards death. The goal isn't to get there before everyone else; it's to get there last, after you've shoved as many people in front of you as possible. Purgatory Glory, I don't understand how you have such a hard time pasting Andre the Giant against a black background, or how you have difficulty making simple white boxes to haphazardly throw text in with an inappropriate font. The final masterstroke is the genius usage of two red triangles that frame this image in a world of failure. Andre the Giant is likely spinning in his oversized coffin, cursing Hulk Hogan for killing him at Wrestlemania III so that he can't mangle Purgatory Glory for ruining his image. 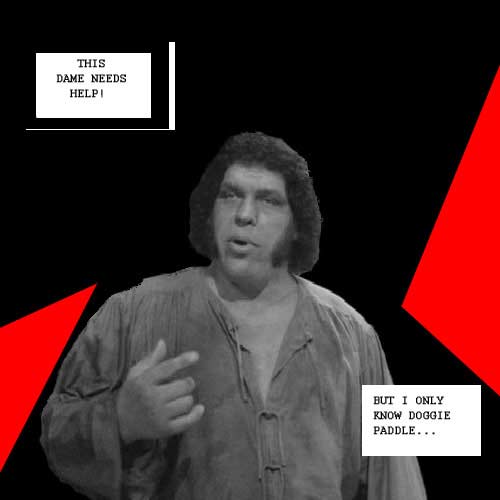 Christoph has a highly acute sense of humor, the kind powerful enough to draw a mustache or eye patch on a man in an advertisement. Here we see that genius demonstrated by doodling a treasure map on no less than a man's head! Now I know most of you are probably shouting "HE GOT TRAYSURE ON HIS HAYD" while violently pointing at the monitor in astonishment over this hilarious image, but stop for a minute and think about a little something we call quality. Quality is what keeps us from living in caves and having sexual relations with lascivious dinosaurs. We know that there are better alternatives, and we know it is best to strive for these alternatives. We are also smart enough to know that if we have to settle for less, there are proper ways to settle for less. A bad idea like this at least needs to be executed properly to be funny, which means actually attempting to make it look like all these details are a part of his head. People don't normally have clipart floating over their foreheads, so naturally this is grating to look at. This picture fails on two levels. It fails as a funny Photoshop image, and it fails as a map. I think right now there are cartographers that are throwing up in disgust over this horrible raping of the important profession of map making. Christoph, you just took a big proverbial shit on the works of every cartographer out there. May you never be allowed near a map or globe again! 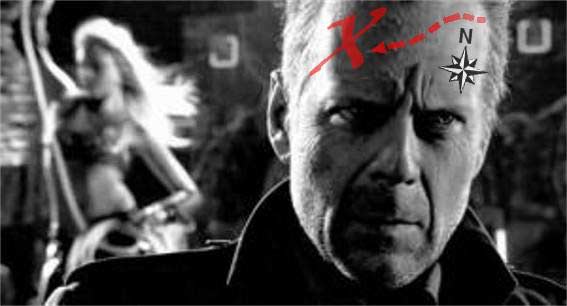 coltron4040 uses an artist's touch to slam colorful shapes across the canvas, making bulbous forms that treat the foreground like holes in the background. His usage of chiaroscuro is—wait, what? What the hell kind of crap am I looking at? The best you can do, coltron4040, is stretch a small graphic of a Legoman over a boring picture until it's a blurry mess? How long would it have taken to find a better background (perhaps a Lego village?), or make the text stand out more from it? How long would it have taken to trace the shape of the Legoman to create a more crisp form, and then fill in the few details? This kind of laziness isn't helping anyone. It's hurting America and that's why China is beating our asses in Photoshop comedy every damn day. 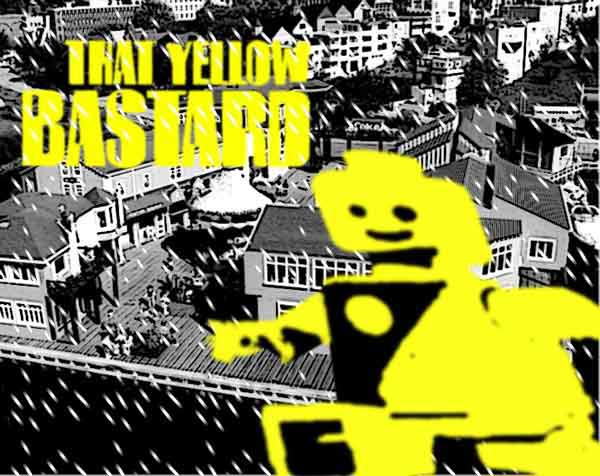 Yog-Sothoth figured out how to deliver dioxin poisoning through your monitor. I have to say, at first I couldn't tell what he had Photoshopped in this picture. Then, after I tore away the flaking, scabby flesh that had encompassed my eyeballs, I was able to see one of the first nominees for the World's Worst Cut and Paste Job 2005. Thank you, Yog-Sothoth, for either being completely blind and unable to see how poor your work is, or being a jerk and not caring. You'll be hearing from my lawyer about this. 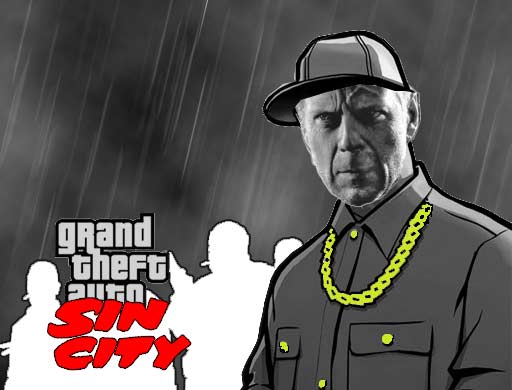 That's it for this week. Thanks again everyone and please come back when we have something new to show, which will probably be in seven days time. Synchronize watches!