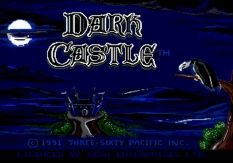 At a Glance: Somewhere on the used games shelf at a Funcoland near you sits a black Sega Genesis cartridge of pure evil, tantalizing many a curious gamer with its promises of forbidden knowledge and ancient secrets far beyond their wildest dreams. But beware; Dark Castle's gift comes at a considerable price, for to play this game is to lose your eternal soul. 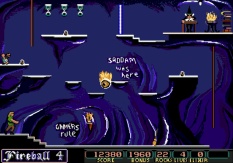 In the wide world of gaming, there are few genres I despise more than the "ultra-realistic trial-and-error jumping simulation". When the apocalypse comes along in 2012, there will be no room in my gaming fallout shelter for crap like Dark Castle where you have to spend half an hour memorizing the exact combination of actions to get across each screen. And this is coming from someone who would probably rush into a burning building to save the Japanese horse racing games.

Game Plot:
Now you've done it! Did you really have to volunteer to go in after the Black Knight? You know what happened to the last warrior who did! Well, in your quest, you'll quickly discover that the Dark Castle has four areas, called Trouble, Fireball, Shield and Black Knight. From the Great Hall, you enter these areas by choosing on of the four doors.

Little is known about all the pitfalls that await you, hearty adventurer, so you will have to rely on your quick wits and fast reactions to stay alive.

Hearty adventurer? Cut the crap, Electronic Arts, the main character of this game is a guy in green tights who thinks he can destroy an ancient evil with a satchel full of rocks. Rocks. He is not Mega Man or Sonic the Hedgehog. In video game high school he was the D-student who got kicked out of platform jumping class for fighting with a trash can.

Dark Castle's physics system is constantly bending the laws of time and space to find new ways to kill you. For example, if you miss a platform, instead of falling in a smooth arc, you jump forward, pause for a second in midair, and then plummet to your death. Moving your character around is basically a virtual pet simulation where you're lucky if he does anything you tell him to. Throw in the fact that he can die from falling down the stairs and this may be the worst adventure/rpg ever made. And the saddest part is it's not even the best game about dying from falling down the stairs.

Are there actually people who enjoy this type of game? If there are then I sure hope the U.S. government calls them the next time they need a ragtag team of mercenaries to save the world, because they're a hell of a lot more badass than anyone I know. The only good thing about Dark Castle is that everyone attempting to play it will suck just about equally, meaning there's nothing separating me from Nintendo virtuoso, Luke Edwards, besides the latter's boyish charm and ability to drink through a straw without injuring himself. 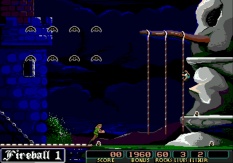 Just in case you needed reminding that they're evil incarnate, the developers of Dark Castle made it so your character can trip over objects lying on the ground.

Okay, you made it so touching the enemies causes instant death. That's pretty stupid, but as a mature adult I can deal with it. There's no need to insult us both by attempting to rationalize your insane video game logic with some bullshit plague excuse. You want to have "realistic" falling damage one second but then kill me for touching a small rodent the next? Sorry jerks, you can't have your rat pie and eat it too. This game is about as authentic as a prison movie without a cameo by Rudy Ray Moore.

Weapons: In the future, rocks will have onboard guidance systems and be able to drain people's blood like the silver ball in Phantasm. In the middle ages, rocks are just rocks.

Number of Levels: 14 screens. That may not sound like much at first, but once you've spent 3 hours trying to get your clumsy hero to jump onto a rope, it feels like the distance to mars. The trial and error jumping puzzles, along with the linear level design, make for gameplay that's about as open-ended as a dvd menu.

Number of Bosses: The final boss is a knight who throws beer mugs at you. It's one of those bizarre "Is this ironic or just stupid?" moments that would probably make an internet hipster's giant head explode.

Defining Moment: When I came to the shocking realization that my warrior had no nose or mouth. Where did all of his grunting noises come from? Then it hit me; I was obviously in hell.