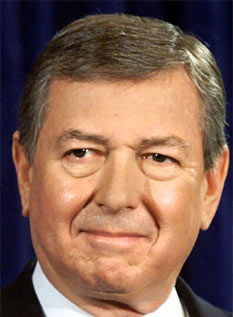 Fuck THAT thing.It's generally true that when you gather a large group of people together the entire group becomes about as intelligent as the stupidest member of the gathering. Sometimes this really doesn't make a lot of difference, like when you're corralling mongoloids or sequestering nuclear scientists inside a hunting lodge near the Austrian border. Unfortunately, when there are one or more lumps of humanity with intelligence well below the mean they can prove to be the bad apples that spoil the bushel of people. Somehow, in the atmosphere of hyperventilating patriotism that was running rampant following the explosion of a couple buildings here in the United States, our congress reverted to almost Cro-Magnon levels of intellect and handed the government of the United States over to a bunch of thugs and whores.

I've said it before and I'll say it again. I hate no man in American politics, throughout the history of our Union entire, more than I hate John Ashcroft. He is a villain that makes slave-owning secessionists and intern fucking presidents look like martyred saints on the altar of our history. While our attention was diverted on problems real and fabricated throughout the world he and his cabal of evil have spread beneath our feet like an indelible ink stain on the fabric of our great democracy. His apparatus lurks in the shadows, hungry for us, for those who he merely feels are doing wrong, and our elected representatives handed him a heaping serving of our freedoms on a silver platter called the Patriot Act.

Like a man waking in his bed from a fever dream of alcohol next to the most syphilitic whore in the entire city, our elected officials and what few watchdog groups remain to patrol them have suddenly realized the peril our country is in. While we were driving spears through the hearts of tin pot dictators and religious fanatics abroad a cancer had taken root in our midst and that cancer, under the malignant sway of John Ashcroft, is loathe to uncoil its many tendrils from the diseased body of the United States. No, like all good cancers it hungers for more, and while it laughs off the desperate attempts to excise it by our elected officials it is already planning to expand, to metastasize, into other organs of our once proud nation.

What is this Patriot Act that I'm pouring out such melodramatic prose about? I would absolutely love to tell you. The Patriot Act is a collection of backdoors and loopholes for organizations like the FBI to circumvent due process and the rights of the individual to privacy and even, under some circumstances, to safety. To assist you in understanding the complex dangers of the Patriot Act I have put together a convenient and easy-to-use bulleted outline of the document. 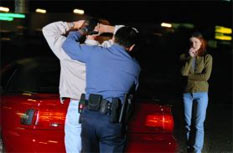 I'm sorry ma'am, but your boyfriend is under arrest for having unlawfully shifty eyes.1. Expanded Surveillance With Reduced Checks and Balances. The Patriot Act allows the FBI and other government organizations to conduct searches in depth without oversight and without the impediment of restrictions designed to safeguard the freedom and privacy of those who cannot be demonstrated as connected to criminal activity. What this means is:

You are broadcasting an IP address. You computer is sending out a signal, or IP address, to government intelligence officials who can use this so-called "IP address" to determine whether or not you are a criminal. Good indicators that you are a criminal include an over abundance of bestiality-related spam mail, chatlogs with 19/F/CA, a JPEG image of an explosion, the words "terrorist" or "bomb" in any documents on your hard drive, and of course e-mails from shady Nigerian money launderers.

The government is free to record bedroom and bathroom activities. The FBI and CIA can now install the X-11 webcam in your bedroom or bathroom to record you. In one case Federal officials videotaped a man masturbating to a Jane Fonda workout video in his bedroom and then showed him the tape as a means to force a confession. In another case the FBI installed a streaming webcam into the skull of a woman's pet dog and used remote control technology to video tape her taking a shower. This was all done because "[the woman] was suspsiciously hot." In a third case the government actually secreted a very diminutive female operative into the bathroom laundry hamper of a man suspected of supplying money to terrorists. While no evidence to support this was uncovered the man was still detained for questioning for some eight months thanks to "illegally distributed 'tiger stripes'."

New data collection methods broadly violate the average citizen's right to privacy. The Patriot Act has authorized the FBI in conjunction with the Department of Defense to create a super computer system capable of collecting and processing every single piece of personal information about every citizen. The system, called MANIFOLD GODHEAD, is housed in a huge obsidian pyramid at the center of the Pentagon with a glowing red light at its apex. Occasionally it will flash the name and location of a suspected offender on terminals throughout the complex and storm teams of men in black body armor will slide dramitically down fire poles while shooting MP5s.

New definitions of terrorism expand scope of surveillance. According to the Patriot Act terrorists are no longer crazed bombers or sinister and cackling theocrats armed with sabers. The Act specifically defines terrorists as "those commiting or planning acts of sedition against the government or those who John Ashcroft personally feels are crumb bums." 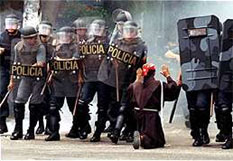 MANIFOLD GODHEAD told us that you downloaded Radiohead's "Hail to the Thief" before its street date.2. Overbreadth with a lack of focus on terrorism. Several provisions of the USAPA have no apparent connection to preventing terrorism. These include:

Government spying on suspected computer trespassers with no need for court order. In addition the government doesn't have to actually have any evidence that the person is a computer trespasser. They are free to go "on a hunch" or use the time-tested crimefighting method of "gut instinct" to conduct detailed surveillance operations.

Wiretaps now allowed for suspected violations of the Computer Fraud and Abuse Act. It's not widely known, but under the aegis of the Patriot Act and the FBI more than 1,000 college students and suspected liberal seditionists were sentenced by a secret court to years in federal prison. Their mistake was installing Bonzai Buddy, which now features a government-sponsored data collection script that will detect the use of cheat codes in First Person Shooters. IDDQD is a direct violation of the Digital Millenium Copyright Act.

A lot of people think that the Patriot Act doesn't really affect them. They assume that as long as they're an upstanding citizen they will never suffer the consequences mapped out by the Act. Well let me ask you a couple questions Mister High-and-Mighty! Have you ever smoked marijuana? Under the Patriot Act this is now an offense punishable by up to six years in a secretive Federal holding facility. Do you listen to MP3s? Even if you own the CD and ripped the MP3 yourself you are violating the Patriot Act and will be subjected to freezing experiments at a special "Music Camp" outside Washington DC. Do you download or otherwise view pornography? Thanks to the Patriot Act looking at images or moving pictures of women wearing anything less than an ankle-length frock will result in immediate sterilization.

I would advise you to look closely at who voted for the Patriot Act and help ensure that they never hold office again by voting against them, even if it means voting to elect a murderous robotic overlord. In the meantime, apply pressure to elected officials by writing letters to them in which you threaten to break into their homes and rearrange their furniture while they are sleeping, call your congressmen and leave mysterious messages that imply you will hack into his computer and blackmail him with all of the shemale bit torrents he has running, and most importantly attend John Ashcroft's next press conference and storm the stage ululating and wielding a vulcanized rubber dildo. These are all, for the time being at least, legal and perfectly patriotic ways to show that your voice counts in this great democracy.

Hi gang, it's your friendly albeit obnoxious Internet eFriend Josh "LiveSock" Boruff with the not-so-shocking announcement that a certain weekly feature remains weekly. We have, thanks to the SA Forum Goons, a brand new Photoshop Phriday. This week we take commercial warfare to a new level, the kind of level that can't be explained without saying "literally" a lot while slamming one's fist into one's palm to drive home the important point that this is "literal." Please give these needy images your attention. It's the least you can do.