Filed by Houston Nutt for The Metaverse Minutely 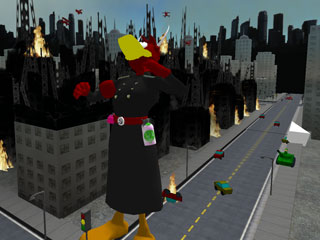 Terror gripped Second Life today as a gigantic gridcrashing gander goose-stepped through the Capitol. With the military decimated and the hitherto invincible orbiting banhammer completely ineffective, many residents can't help but wonder: Is this the end?

It certainly seems possible. Looters run rampant through the streets, breaking windows and carting off valuable piles of virtual penises. Endless barrages of self-replicating lolcubes have lowered framerates to levels approaching the Great Lag of 2004. And ever since the military, during its failed attempt to slay the primordial beast, enabled push bullet technology, lowlifes and criminals of all sorts have wormed their way out of the woodwork, attacking each other with replica submachine guns, homemade C4, and watermelon cannons.

Some residents whisper conspiratorially, claiming the censorial Chadrick Linden is the force behind Griefzilla.

"Come on," said artist Chesterfield Down, "a giant duck just happening to attack in the center of Second Life? I don't buy it. There is no way the downy feathers of a duck could make a hole that large. Plus, we all know it's just part of a greater cleansing plan. Face it: Philip Linden doesn't care about furries." 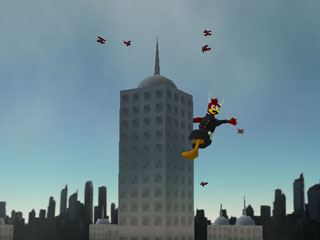 Others speak with apocalyptic overtones.

"This is it. This is our punishment for sin," said bank director Ham Japheth. "This is our Sodom. And I have kids, man--Jacob, Joshua, and Ronald. Tonight, I am taking my family and we are leaving for There, and we're not looking back. What? Jacob! You packed the unsalted pretzels! Goddammit! Say, Ronald: would you mind looking behind you for a second?"

However, neither rain nor snow nor phallic popguns can keep the brave investigative reporters of the Metaverse Minutely from making their rounds, and our reporters in the field have brought back some truly startling information about the origins of this monster. Griefzilla, it seems, was once no more than an ordinary resident with the unassuming name of Plastic Duck.

The Legend of Plastic Duck

Plastic Duck was born in a northern bog, in one of the many previously pristine wetlands that dotted the Second Life countryside in bygone times. 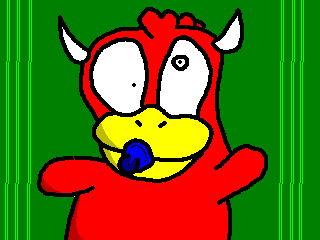 'Plastic Duck', Self Portrait, Age 8 The child of a distinguished house builder and an educator, from an early age young Plastic was burdened with expectations of imminent Second Life superstardom.

But for all their outward pretensions of peaceable prosperity, the Duck family had a darker side. Mr. Duck had deep ties to a militant wing of the furry community, while Ms. Duck financed a drinking habit by secretly stripping at a nearby establishment of ill repute. Often, Plastic was left alone in the house, with only the company of his building blocks and a television which, by some strange coincidence, aired nothing but reruns of slasher films and Cutco commercials.

Not much is known his early adolescence, during which young Plastic raised himself amidst a ruinous family. The tales, however, loom larger than even his present form. It is nearly impossible, even for our intrepid reporters, to separate fact from fiction. All we can do is relate the whispers of his monumental misdeeds. 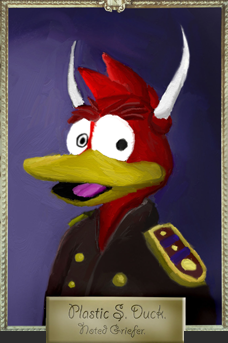