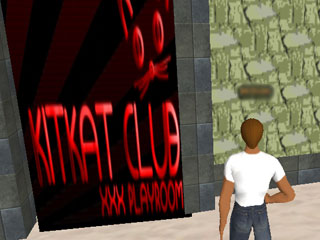 I sidled up to the bar. Sidling ain't easy when the sim brims with forty people and your cable is slow already because the neighbor's kid finally discovered pornography. But I ain't into easy, unless it's a dame. Like the type of dame who wears red at Club KitKat.

So like I says, I sidle up to the bar and order a Plastic Duck. Barkeep looks cool, but I know he's three keystrokes from a dead faint. No one drinks a Plastic Duck and lives. Not if they're lucky. The unlucky ones...it's just a cryin' shame, seeing grown men permabanned like that.

The dame looks me in the eye. At least I think she does. Kinda hard to tell without, you know, moving eyes and all. Maybe she was just mouselookin' around. Point is, now I know she knows I know how to die by the drink. All I need is for her to step in and save me before I get this account banned too.

Her arms reach out and flail about like an epileptic at a rave.

Pride? Prejudice? What do any of us drink to forget? Just 'cause, I tell her. Just 'cause.

I never known a man to drink a Plastic Duck and rez right in the mornin'. Either you got a death wish or you got a mighty fine script in that inventory of yours.

Baby, I do tricks with scripts like I'm FIC. You know, back when I used to show Frontier Linden 'round these parts...

You know a Linden?

Honey, I know the Linden. Phil and I are old time friends. Back in the early days, before the hype, before the millions of users, Phil and I used to ride up over yonder and hunt bugs in the system together. 'Course, now with Second Life being open source and all, they don't need me much anymore, so I mostly keeps to myself.

She leans in to whisper to my ear. Dame's got a rack the Post 6 girls would need a Copybot for, and from what she's sayin', she wants it all up on me.

I smile. Them dumb dames are all the same.

For those of you who may have missed the endnote in my last article, Second Life superstar Anshe Chung is steamed as a bucket of rice. 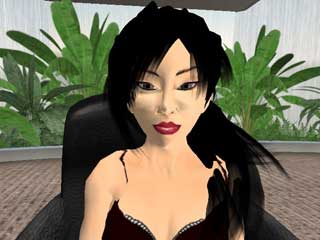 The face that launched a thousand dicks As you might recall, I wrote an update chronicling an "attack" on her at a CNET interview in Second Life. That little incident, for reasons still unknown to me, became international news.

The story spread throughout the web, and became a subject of much consternation amongst the electronic intelligentsia, with a collective commotion rivaled only by each and every "Dear Richard" letter Lowtax has ever received. The consensus was: poor Anshe. Poor, poor millionaire Anshe.

While I was of course hurt by allegations that members of our upstanding forums community were involved in the patently immature pastime of penis chucking, I could understand the distress felt by many in the Second Life community on behalf of Anshe. After all, who in their right mind would choose to have a totally ridiculous and inexplicable but nevertheless noteworthy interview with a major news website disrupted by dicks? But two weeks passed, and the story seemed deader than my dreams of ever moving out of my parent's basement into the cold, lancing light of day.

The first was a notice from YouTube telling me that a DMCA complaint had been filed against me by Anshe Chung Studios and, as a result, my account had been deleted. That really stung, because I'd been planning on uploading this sick cell phone video of me ghostriding the whip behind my high school with a backing track mashup of 50 Cent and Queen and it was totally going to be totally, like, revolutionary. 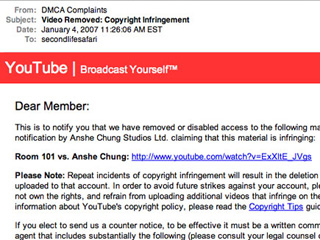 Oh hang on I forgot to set my spam filter for The second was an email from Stephen Hutcheon, online technology editor of The Age, which, my Australian roommate tells me, is sort of like the New York Times of Australia. At least, I think that's what he said. Actually, I haven't a clue what his disjointed ramblings in foreign tongues mean. When he talks I just give him some Vegemite and pat him on the head. Seems happy enough after that, the adorable bugger.

In any case, Hutcheon had received an email from Guntram Graef, the CEO of Anshe Chung Studios and husband to Ailin Graef, the woman behind Anshe Chung. Ol' Gunty claimed that images of Anshe Chung were copyrighted and that he hadn't authorized Hutcheon to post a photo montage made up of images from my original article. Hutcheon wanted to know if I'd been served with a similarly stupid notice.

Now, I'm no stranger to ridiculous requests. When I worked as a waiter in West Bumfuck, New Hampshire, we had a crazy old cat lady who brought a balance-beam scale with her to dinner and measured her salads until we served her one that weighed exactly five pounds, eight ounces. She required an equal distribution of radish slices and baby tomatoes. She ordered a prime rib dinner and kept it at a deserted place setting until, at the end of the meal, she said she wanted it wrapped up for her dog at home.

But even by those low standards, this was stupid. Now, I'm no renowned journalist like Evan "Pantsfish" Wade nor a famous Internet lawyer like Leonard "The Cripwalking Ulcer" Crabs but I'm pretty sure back in high school I once managed to pause the pocket pool long enough to learn about something called fair use which allows journalists legal leeway if the alleged infringement is newsworthy. I think it was also the name of an ancient Aztec crimefighting dog but I might have just been watching McGruff that morning so I don't really remember. 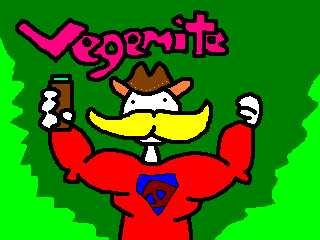 AUSTRALIAN SUPERJOURNALIST The point is, Stephen Hutcheon is a smart guy, and he knew what I knew: this was just a ploy for image control. Luckily, as an editor, he has all sorts of fancy contacts. So while my article--the one that actually contained the offending images and video--languished in obscurity, Guntram's misguided and baseless legal threat against Hutcheon got quite a bit of negative attention. After Hutcheon published an article that laid out the whole sequence of events, the damage to Anshe's image was pretty much complete.

Or so everyone thought.

On January 16th, CNET published an interview with Guntram Graef in which he begged for forgiveness for his unbelievable asshattery. First, Graef said that he tried to contact all parties involved before he sent legal threats. That's bullshit, because I never got a letter from him. I just got an email from YouTube saying that they had deleted my account, deleted all of my friends' accounts, burned the servers on which they had once resided, and shot the ashes into the center of the sun.

Then, Graef said he was had incorrectly understood that the posting of pictures of Anshe being pelted by pixellated penises constituted copyright infringement. His bad. Slip of the tongue. Limit the freedom of the press? Come now...don't be silly! Where do you think we are? China?

See, according to Guntram, posting those pictures was actually defamatory assault, and so the republishing of them by any news organization was "unnecessary and tasteless and discredits the Western media and the whole concept of freedom of speech." 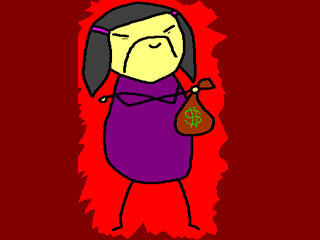 This? Only mildy tasteless. Unnecessarily tasteless and defamatory? Guntram, Guntram, Guntram: I think you know better. What was done to Anshe wasn't tasteless or defamatory. Not by a long shot! It takes much more than some flying phalluses to rise to those lofty Internet standards.

For example, it would probably be tasteless and defamatory to call your wife a dog-eating slant-eyed protohominid rice-farming worker-drone.

It would definitely be tasteless and defamatory to describe the way the summer wind, after crossing the Mongolian highlands with elegant ease, inflates her cavernous vagina like a giant, meaty hot air balloon and wafts her gently aloft like a soy-blooded Mary Poppins.

Yes, if I were to allege either of those things, I could be culpable of some civil crime. But in reality, all I did was post and propagate some pixellated penis pelting. 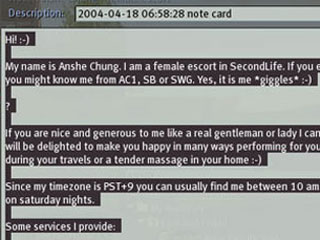 Oh sweet, sweet irony A former electronic escort decrying the abasement of her image because it has been associated with digital dicks without her consent? It's the bleeding edge of hypocrisy, and Guntram Graef likening the whole thing to "cyber-rape"--I don't even know what that means--doesn't help her case. And while tech gossip site Valleywag and the improvisational genius Ze Frank have commented on this contentious issue, the news outlets that, in the past, so eagerly reported on everything Anshe have, thus far, ignored this immensely amusing dramabomb.

But who expects the mainstream media to voluntarily admit their autoerotic hyperbole? One can only hope that, as more and more journalists assume the skeptical stance of Forbes' David Ewalt and more and more non-goon groups engage in griefing, Benchmark Capital, the money behind Linden Labs, begins to realize the error of its ways.

But that's a long ways away. In the meantime, I'm just gettin' on gettin' on, complete with a stalker who keeps emailing YouTube every time I register an account. Since I'm hamstrung by morons, I guess you'll have to just keep on circulating the original video or digging the original article to get the news out!