Welcome to State Og, where our motto is: We might have blocked out the sun, but don't you think you've seen enough of it by now anyway? Thanks this week go to Dennis "Corin Tucker's Stalker" Farrell (holds the world's record for: most frequent use of the word "gonorrhea" during Thanksgiving dinner) and Jason "Vengeance Otter" Johnson (holds the world's record for: most situps while paralyzed from the neck down).

b. I hereby proclaim that I will never attempt to sue/prosecute State Og for loss of property and wages, criminal activities, and non-criminal but incredibly creepy activities (the Q-Tip treatment, assball)

d. Upon my death, I DO NOT wish for there to be an autopsy or any test that can establish "peanut butter in brain cavity" as a cause of death

e. Vague and mysterious experiments may be performed by State Og on my loved ones without their knowledge, and occasionally without even State Og's knowledge

a. I will withold all urges to correct mistakes and typos I come across in State Og publications

b. Gravity is a privilege, not a right. It may be taken away from me without warning, and if I ever return to Earth I will try my very best not to land on a State Og agent's car.

c. If questioned by ANYONE, I will claim to have never seen this picture: 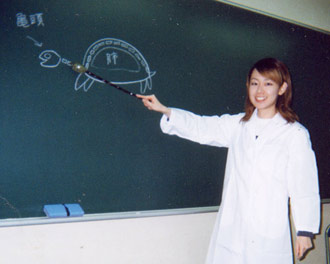 ElCyberGoth: Champion of the Common Man.

It is widely accepted that ElCyberGoth's life was the inspiration for the 80's TV series The Fall Guy, which starred Lee Majors.

Few have served State Og as long as the mysterious agent known as ElCyberGoth – a man who shrouds himself under such a dark veil of ominous secrecy it is rumored that he never even filled out a W-2 form when he started working here at Og headquarters. Some say this is because ElCyberGoth is one of our elite assassins, and all official records of his existence have been destroyed to aid his covert activities to undermine all governments of the world (except Zimbabwe’s). Still others say the reason for the absence of records in our HR department is because we never actually hired ElCyberGoth and that he just showed up at our office one day after our cafeteria started serving tuna cheese-melts sandwiches, and never left.

Regardless, we are happy to have ElCyberGoth with us as a possible employee, since his tireless efforts as a community leader and activist reflect well on State Og's image as a socially responsible company. When Big Tobacco wanted to clear-cut an entire forest, burn all the lumber, mix the ashes with medical waste and dump it all into the local water reservoir for no perceivable reason, ElCyberGoth was there at all the protests carrying a sign of near-billboard proportions with the words, “BIG TOBACCO IS HITLER!” When the government wanted to test crack-babies as a replacement for armor-piercing tank rounds, ElCyberGoth was there at all the protest with an even bigger sign featuring the words, “CELEBRITY CHEF EMERIL LAGASSE IS HITLER!” When both of these issues turned out to be outrageous lies that ElCyberGoth made up and perpetuated to get attention, ElCyberGoth was the first out to protest with a sign reading, “ELCYBERGOTH ISN’T HITLER, BUT HE’S PRETTY DAMN CLOSE!”

We can never be certain what wacky plans ElCyberGoth has in store for us in the future. But as long as he keeps up the good work (whatever that may be), he’ll get all the free cheese melts he can eat.