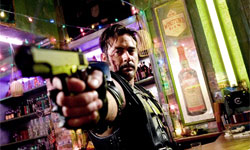 The Comedian is funny, but his foul-mouthed wisecracking wears out its welcome.I admit that I have not been a longtime fan of Watchmen, the groundbreaking comic book series and graphic novel by acclaimed comic book creator Neil Gaiman. In fact, I did not even read the comic until a few hours before I sat down to watch the movie. I'd heard about it of course, heard that it was the ultimate superhero story, but for some reason I put off reading the comic until I had a review DVD of Watchmen hot from the studio sitting on my coffee table.

At that point I realized that if I reviewed Watchmen without reading the comic first I would never be able to live it down. I rushed out and bought a copy of the complete graphic novel and, I must say, I was surprisingly entertained. Watchmen the comic definitely ranks right up there with the X-men or the Spiderman, but would the film adaptation live up to those movies?

The answer is a resounding "not quite." Before you bite my head off, Watchmen is not a bad movie, per se, it just fails to live up to its potential on so many levels it's hard to see it as anything other than a disappointment.

The film begins with the murder of Edward Blake by a mysterious killer. Blake seems to know his murderer, but the killer's identity is kept secret at least for the time being. A superhero private investigator named Rorschach discovers that Edward Blake was the alter ego of a superhero named The Comedian and as he investigates the murder he realizes that some mysterious killer has been killing various other superheroes, mostly from the superhero group called The Watchmen. 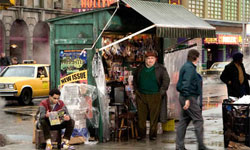 New York City is an unbilled character in the film and the set designers deserve an Oscar.The Comedian doesn't really seem to have any superpowers other than a lot of guns and he is clearly based on The Punisher. I think that's okay to make references like that, but it seems a little like they wholesale took the Punisher character from Marvel and stuck him in the movie. Instead of a skull shirt, The Comedian wears a mask and cracks one-liner jokes every time he kills people (which you only see in flashback because he dies in the first scene).

Once Rorschach has been turned on to the muders he tries to warn the cops, but they have other things to worry about like increasing unrest in New York City.From this point, the movie disjointedly begins telling the origin stories of various members of the Watchmen as Rorschach tries to contact and warn each of them individually.

Night Owl is the first one he tries to worn. He's based on Batman and like Batman he lives in a mansion and has all kinds of secret technological weapons. Night Owl's girlfriend is Silk Spectre, although they are having trouble in their relationship. Here we learn that Silk Spectre's mom was also called Silk Spectre and was also a member of Watchmen. It gets pretty confusing, because the same actress plays both Silk Spectres, so it can take a few seconds before you can figure out whether it's a flashback or present day. 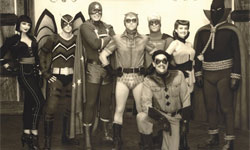 The flashbacks are fun, but there are too many and they stretch the running time about 45 minutes too long.Then things get really confusing. It shows a science lab back in the 1940s and it shows a scientist getting killed by radiation, but then he mysteriously reappears only he is blue and he can do whatever he wants. He can kill people with his mind and he knows everything. At one point he makes himself gigantic and destroys an entire army. This is Doctor Atomic, founder of the Watchmen. But Doctor Atomic is missing and nobody knows where he has gone. Rorschach thinks he was killed, but retired Watchman Ozymandias thinks Doctor Atomic is still alive.

Rorschach sets up a meeting with Ozymandias, but before they can meet Ozymandias is brutally murdered. This part surprised me quite a bit, because it is not in the comic. Ozymandias is an interesting character because he's a hero, but also similar to a villain because he runs a giant company and is using all of his powers for profit. The film makes references to Halliburton, Blackwater, and Enron, although none of these companies are specifically named.

The death of Ozymandias prompts Night Owl and Silk Spectre to reform the Watchmen, which by then is just the two of them and Mothman who is in an asylum. They try to recruit Mothman but he says, "Let them come and get me!" Viewers paying close attention will note in a later scene there is a newspaper headline that reads "MASSACRE AT ASYLUM!" and then below that the text says something like, "Watchman among the dead." I couldn't quite make it out on the DVD, but it was a workprint so you should be able to see it in the theater and on Bluray.