It's only January of 2010 and already it's shaping up to be one of the hottest years in gaming in years. The big releases for January are almost too big to be believed, and you can believe that no release is bigger than the hotly-anticipated space RPG action game Mass Effect 2. We were lucky enough to get our hands on a copy and all we can say is: wow. Okay, haha, there's more to say! 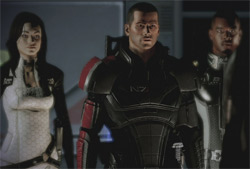 Fans hoping to play Chewy or Captain Solo will just have to wait for further installments, because they aren't anywhere in sight in this game. Disappointing? Maybe, but fans of good action RPGing in an exciting science fiction setting should keep reading!

No problem, you're thinking, you can just fire up the PC copy of Mass Effect 2 and transfer your Xbox 360 character over. Nope. Even though I had an Xbox Live account with lots of points left there was no way to access this from the menu on Mass Effect 2 for the PC. PS3 users may have more luck.

The game begins with Shepherd dying. He's on a mission and he dies and then is cloned back to life by this evil organization called Cerberus. The head of Cerberus is Shadow Snake, who you may remember as a character from Mass Effect 1.

EA really went all out to come up with a plot for this one, because, get this: the universe is in danger from aliens. Once again, be prepared to save the universe. This time around it's not from the geth or the reapers, but a mysterious alien race called the "Collectors" who keep attacking and massacring humans.

Sex is a much bigger (and hotter!) part of Mass Effect 2.Another big drawback from Mass Effect 1 is that Mass Effect 2 has way more talking. From the start where you die and then wake up to the ending when you have to sacrifice yourself to destroy the Collector Enslaver Hive with the overloading Normandy II core you will be talking constantly. After about 20 minutes I was hoping for an option to just shoot everyone I was talking to! Ha, but seriously, it was a big drag and even skipping through the dialogue is bad because you can say stuff that gets your character killed. You really have to pay attention.

And let's be honest, nobody comes to games like this looking for a story. If we wanted a story we'd read Where the Red Fern Grows, not play it in space!

On the plus side, the action is amazing, with new take down attacks, way more characters, targeting, finishing and kill shots, trophy kills, and limb destruction. The rag doll physics are much better as well and the addition of jiggling butt and boob physics was a welcome addition to the game even if it doesn't add much to gameplay. If you're like me you'll be ogling squad mates Miranda and Subject Zero every time they die on a slope and go bouncing down into a ravine.

Speaking of ogling, the sex scenes are back in Mass Effect 2 and they're hotter than ever before. A big bonus is the removal of gay scenes, which were easy to avoid in 1 but just really upset me that they were an option for children playing and being influenced by the game.

Luckily, the hetero scenes are back and there are way more options and they are even sexier. More nudity, more explicit dialogue, and like the recently-released hit game Dragonage, once you seduce your team members you can go back any time to fill up on the sexing. Can you say...HELL YEAH!? BOOYAH!

One thing I really loved about this game was all the downloadable extras. From the start you can visit a shop on the Cerberus base and buy downloadable content with real money. Pop-up information informs you of new content and discounts every time you load the game, which was really helpful. 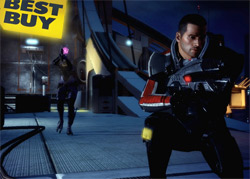 The in-game ads work with the neon-drenched, cyberpunk space setting.At $3.99 per item it can be a little pricey, but for under 20 bucks you can get the best quests and armor available. Plus there are freebies that cost nothing, including a Nega Yoke, three different hairs, monster truck tires for the Sidewinder ($3.99 to download), burst grenades, and two additional revealing outfits for Subject Zero including a shell bikini and a sequined monokini.

The in-game advertising was not distracting at all either, with sci-fi commercials for Best Buy and the movie Avatar, both of which actually work in the Blade Runner like space station environment.

We have to deduct points for the lackluster online gameplay, which left us wanting to go back to Modern Warfare 2 and score a few more kills. Multiplayer includes all the planetary minigames (Quarian Sharking, Prothean Sudoku, Smear the Hanar, and Volus Bowling), a split-screen "catch-the-collector" mode, and online head-to-head battles or 4v4. Online co-op has been removed from the game, which is a shame, because it worked so well in Mass Effect 1.

Oh, and by the way, fuck you Robert C.

If you have any comments or a differing opinion, please contact the author.