The Elder Scrolls Online is almost as anticipated as Age Of Conan and Warhammer Online once were. With a little luck it might even equal their long term successes.

Naturally, people want to know what the game is like. Since beta participants are bound by a non-disclosure agreement, though, very little has been revealed.

We're about to change that by breaking the NDA. Prepare yourself for a flood of details that paint a comprehensive picture of The Elder Scrolls Online.

There are items that you can pick up, or "loot".

Most characters in the game have vaguely British voices. This is because The Elder Scrolls is a fantasy universe, which is the only place where such accents are appropriate.

There is a lot of grass. No, like twice as much as you're probably thinking.

Buildings are made of mismatched rocks and shitty wood, like no one even cares.

If you want to go faster you can get yourself a horse, I guess. Your character model will probably sit on top of the horse.

You start off by fighting enemies that are very weak while you are equally weak. By the end of the game you will be fighting enemies that are very strong while you are equally strong. It's almost exactly like when you fought those first guys, now that I think about it, except maybe you press a few extra buttons. Huh. What were all those levels for?

If you get hit too much you'll die.

The world is packed with all manner of compelling enemies. 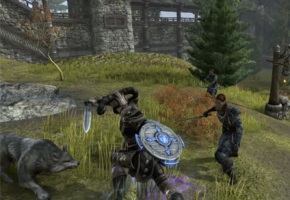 There are bandits. There are mudcrabs. There are bears. Your reasons for fighting them are complex and intriguing. Mostly it's because they're angry and you wandered too close. Sometimes it's because someone tells you to kill a thing and maybe you'll get some gold.

Each and every one of the thirty nine gods thinks you're special and wants to use you in some way.

There is a magic system. It's fairly deep. For example, you can use magic to protect yourself, to heal yourself, or to harm others. As you can tell, this system is as meaningfully open as the world of any Elder Scrolls game.

There's an ancient technically advanced race that had everything figured out and then they all died like a bunch of amateurs.

The whole reason for this game and all the conflict within it? There's an evil. Someone should probably stop the evil. I filed a suggestion that it should be the players who get to stop the evil. That seems like a fun thing to do.

You can choose a sex, race, and even adjust your appearance to your liking. If you choose to play as a scroll, however, your customization options will be limited to a balding hairstyle, a long white beard, and a pair of oversized bifocals.

Artificial intelligence has always been touted by Elder Scrolls developers as organic and limitless. The Elder Scrolls Online makes some fairly significant improvements upon the series' Radiant AI. Characters will stand around for a bit, go to one of few locations, and do canned animations with props. At night they go home. They even stare at you and bark phrases you've heard dozens of times before! Incredible.

Other players will be in the game. You can see them clumped up around quest givers, or at objectives. There's even a chat window so you can see them talking about politics, religion, race, and men's rights.

The Walking Dead: Season Two Episode 1
If I was Telltale, I'd be mad at Telltale for making The Wolf Among Us and showing that you could do so much more with a setup episode. 7/10

The Novelist
The Shining, with a friendlier and stealthier ghost. 8/10