In the interest of transparency, I am biased in favor of Eldritch. It's true. I'm super corrupt. The game flat out bribed me.

It did this by giving me the ability to jump, crouch, lean from side to side, slide, pull myself up on top of ledges, and pick up, drop, or throw objects. This combination of controls is my hidden weakness.

Most games restrict the player's input to actions that will kill an enemy. Sometimes they even allow you to mash a universal button to interact with something in the environment in a prescribed way, like "inspect mass grave" or "shut down nuclear reactor" or "kiss witch". When you are allowed to directly control more of your character's actions than is strictly necessary, it strengthens your connection to the world and your place within it as a dumb asshole.

So my journey began in a delighted stupor.

I found myself in an eerie library. No one else was around, but I squat-walked like a true master of stealth just in case a librarian was lurking in the shadows, waiting to pounce and extract my overdue book fees. Also, from this point forward I never stood up again.

In the center of a nearby room a pedestal displayed a forbidden tome. I could tell it was forbidden because its particle effects made me want to touch it. Another hint that it was forbidden: When I touched it the book warped me to an evil dungeon.

Knowing that this was a roguelike, I proceeded with caution, scouring every corner for artifacts (the game's currency), surprisingly deadly rocks, daggers, pistols, keys, glass bottles, and meat. Yes, this is a game that lets you eat enormous cuts of meat off the floor in one bite. There are even two varieties: Baked or rotten, depending on your preference. 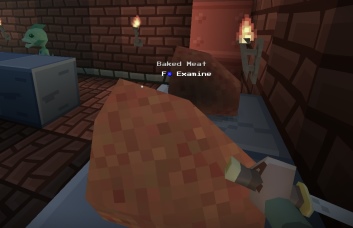 Crouched (naturally) behind a subterranean house and peeking around the corner, I encountered the first living creature. It was a fish man. He seemed pretty happy, hopping around and doing the guttural fish man equivalent of humming. I climbed on top of a nearby wall, sneaked up behind him and dropped him with a dagger in the back.

When I came across some drunk snakes, I began to suspect that Eldritch was probably a little on the easy side. Everything was colorful and a little goofy. Sure, there was something ominous about the ambient sounds, but I felt confident.

Then I ran into the enemies that made sneak attacks almost mandatory, things that seemingly couldn't be killed, and things that definitely could not be killed. Then I died, and felt that familiar impulse to start again with my newfound knowledge - which naturally led to my death at the hands of a fish man.

The dungeons are randomly generated, but every minor path leads to something, whether it's a ladder to another level or some spikes doing their best to scare you off a pile of loot. You won't wander down a promising tunnel only to find that the computer gave up and paved it over halfway through.

You probably didn't come here to read about an in-game map. Well, I didn't think I'd be writing about one. Sometimes we find ourselves in unexpected situations, so let's make the best of it. The map in this game is great. It displays a grid of the current floor, with fairly large tiles that change color after they have been visited. A glance at the map reveals the broad strokes of your journey so you'll never feel truly lost, but since small passageways aren't displayed the sense of discovery is preserved.

Every time you think you have a handle on the game, some minor wrinkle or new concept comes along. Shrines that grant new magical abilities. Banks where you can stash currency in case you die, with connected vaults that can be pillaged. Fountains that grant permanent bonuses to your life. Eldritch makes the gradual unveiling of its systems part of the exploration.

I'm not an expert on roguelikes. I can't compare the complexities of this game to other titles in the genre, nor would I care to if I actually knew things. What I can say is that Eldritch made me feel like a System Shock/Thief/Dishonored crouchy person in a weird world that continually drew me forward, even as it threw spikes and eyeballs and angry shopkeepers at my face.

Batman: Arkham Origins
One year after the release of The Dark Knight, a prequel is released using the same sets, directed by McG. 7/10

Eldritch
You can stride through dungeons bravely, I'll stick to hiding and throwing rocks at people when they're looking the other way. 8/10

Battlefield 4
Your wonderfully chaotic game about throwing yourself into a ball pit of unpredictability and seeing what happens seems to have been mistakenly packaged with a scripted single player campaign again, so you might want to look into that. 7/10