How To Tell Gone Home And Divinity: Dragon Commander Apart

Two of my most anticipated games of the year were released within a week of one another. Sadly, Gone Home and Divinity: Dragon Commander are so similar in so many ways that most people will have a hard time figuring out which is which. Both games even share remarkably similar logo art, with a monster truck doing a sweet jump off a dirt ramp as something explodes in the background.

In today's very special edition of Video Game Article, I'll do my best to clear up some of the confusion by simultaneously reviewing Divinity: Dragon Commander and Gone Home. 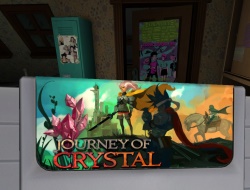 is about an empty house and the people who are supposed to be inside of it. It's meaningful without being cloying or vague. It is a relatively subdued but hugely entertaining experience that will reward every little bit of thought that you put into it.

Divinity: Dragon Commander is about a dragon commander. He has a jetpack and a flying fortress and he is a dragon man that must fight.

Gone Home is focused. This is a game with a sense of purpose. It knows exactly what it wants to convey, and it does so with a level of confidence and artistry that puts most big studio efforts to shame.

Divinity: Dragon Commander wants to be every game in the universe. There's real-time strategy, multiple levels of turn-based Civ-like conquest, political decisions, collectible cards, a dating sim, tech research, and interactive story bits that shore up relationships with your generals and political advisors. Really, it shouldn't work, but every element is tackled with such unbridled enthusiasm and silliness that the result is enjoyable. It's a big old sloppy peanut butter and marshmallow sandwich with chocolate chips, and before you know it your first hesitant bite gives way to a clean plate.

In Gone Home, you can pick up and examine objects as small as pencils and buttons. If you exclude doors, the largest interactive object is probably a board game.

In Divinity: Dragon Commander, the smallest object you interact with is either your dragon-sized jetpack or a strategic map of the world you're conquering. The largest thing is a great big fantasy death ship that your imps cooked up.

Gone Home has no combat. There are no real puzzles to solve in the traditional sense. You explore, and just as importantly you empathize. There is player agency, but instead of driving a story you are engaged in the interpretation of what happened to the people in this house. Playing the game and understanding the story are one and the same. Gone Home takes advantage of the medium in remarkably clever ways to convey its tale in a way that would not work on film or paper.

You can blast so many things in Divinity: Dragon Commander. So many. If you get tired of killing a million men with your army, you can opt to let your generals take over individual battles while you concentrate on the strategic map and politics. This is how I approached an entire playthrough, and the result was lengthy and fun.

In Gone Home everyone is believable, with their own aspirations and failings. So much is communicated indirectly through the environment. What items are out on display? What's secreted away, and why would someone hide it? What's missing entirely? If you take your time and think about your surroundings you'll find all sorts of details about each character. Even when you read something as direct as a letter, your mental image of the person up to that point has an effect on the meaning.

Divinity: Dragon Commander develops its characters in the same broad strokes that the rest of the game works with, turning two dimensional caricatures into well drawn two dimensional caricatures that you wind up liking more than you had anticipated. While the personalities and issues at play are wide ranging and fairly nuanced, everything is plainly stated in a handful of sentences. There's no room for interpretation, just a whirlwind of important information that requires an immediate decision.

Gone Home is unique because it tells a human story that rings true (an incredibly rare thing in itself) with all the humor, pathos, and creativity you could hope for. This is a game that asks you to see the world through the eyes of several people, some of which are sure to be unlike yourself. While games like The Last Of Us and BioShock Infinite succeed in many ways, they often weaken their intended message by falling back on standard patterns of violence and fantastical elements. Gone Home has the confidence to be exactly the sort of game its themes call for.

Divinity: Dragon Commander is unique because you are a god damned dragon commander. You build ridiculous troops, breathe fire on your enemies, conquer territories, navigate a web of politics based on real issues, and read fantastically unfair newspaper headlines about your actions. Every moment is an absorbing mix of immediate gratification and long-term planning. You can take it all very seriously, or you can pause to realize that you're basing a decision about gay marriage on your political standings with skeleton people and elves.

Divinity: Dragon Commander
I'm not sure if this is a video game or a bundle of infectious enthusiasm and ambition distilled into code, but I sure am glad I played it. 8/10