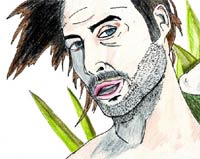 Lost Fans Have TalentEvery single wretched day ancient man had to deal with the sun disappearing and the cold blue moon capturing control of the sky. We know from early myths that the embrace of night was traumatic for ancient man, never certain why the sun would forsake him or if its comforting light and nourishing rays would ever return. Life was a constant struggle, so brutal and harsh that few had the means or heart to survive. Always on the move, following the animals as they migrated across the vast undeveloped landscapes, bleak and savage as anything could possibly be, ancient man was always for want of food, shelter and basic necessity. He killed and ate his prey with the ferocity of the animal, for he was no better a beast in this world. Swiftly, with no great ritual or ceremony to accentuate the action, he dined on raw meals bereft of preparation, tables, utensils, and civility. He bit into flesh and he drank blood and they were the most pleasurable acts in his tortured existence. Ancient man suffered, but he never suffered as we do.

Each and every year there comes a point when the light of the television grows dim. The glowing tapestry unravels before our eyes, leaving but a few points of light alone like stars in the night sky. One by one, our favorite shows disappear into some unknown ether far beyond our reach, and we are left with almost nothing to fill the void except for the terrible pains of unfulfilled want. Worse, there is the horrid uncertainty of wondering if our favorite shows will even return, as networks callously toy with our emotions, waiting until the last minute to decide which shows live and which shows die. This annual pain is worse than losing a loved one. Maybe even 2-3 loved ones in a barn fire or collapse.

As a fellow television viewer, you will no doubt agree with me that there is no greater suffering in this world than waiting for a show to come back from hiatus. With cliffhanger endings and long months with nothing to do but go outside and live life, the wait is nothing short of pure hell. If not for the need for resolution, I would have blown my brains out years ago. In these harsh summer months, when there is nothing to watch but a few quality premium channel shows, life is a constant balance between wanting to die to end the pain and wanting to live to see what happens next. We are finally starting to see what happens next. Just as the sun always returned to give our ancestors light, television has begun returning to give us light.

With that said, here is a brief summary of some popular shows returning to make everything all better.

After a disastrous sixth season, 24 is coming back with big changes, including the return of Tony Almeida, who thankfully survived being murdered twice in season 5. 24 will also be swapping coasts, putting a fresh shine on the show's inexplicably retarded storytelling, random gunfights, poignant interpersonal drama, anticipated betrayals, and torture scenes. 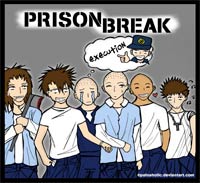 One of television's smartest dramas is back and more erudite than ever. In past seasons we watched as Michael Scofield broke his brother out of prison, where he was on death row for murdering the president's incestuous brother - a crime that never even happened. We watched as the Fox River escapees fled authorities, the international conspiracy, and from each other in search of freedom and justice. Now they are back in prison, but this time the conspiracy wants them to escape. See what Stephan Hawking calls "the defining terrestrial saga of our epoch.