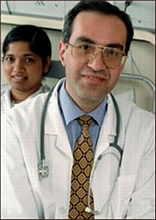 DO NOT TRUST THIS MAN!A person's body is the most essential thing they have in this world. While you may put loads of importance in your riced up Honda Civic or your vast collection of Faberge Eggs, your own body is always going to be top priority. Much like a Faberge egg, we like to think of our bodies as valuable and try to take as best care of them as we can. In reality however, our bodies are more like regular eggs: Fragile, loaded with cholesterol, and incredibly edible (to bears). Consequently, people are put in situations where they face the unpleasant condition of not living which Webster defines as "death". While I don't know why a sassy black orphan with a heart of gold would be an authority on the English language, I refuse to go off on a tangent to discuss that particular issue. Instead, I'd like to subtly re-route this paragraph back to my original point, thereby saving face and getting this article to where it should be. It is very, very easy to get killed if you aren't careful. Dying is at the very bottom of a person's biological "to do" list, but nature seems to want us out of the picture quickly and has thus short changed humans in every thinkable way. We could have at least been provided with an exoskeleton or some fancy purification system for our blood. Instead, we get soft, readily penetrable flesh and an easily bamboozled immune system which is about as effective as the Three Stooges were at any of the jobs they were given throughout their illustrious careers. But what people lack in biology, we make up for in ingenuity. To combat these various threats to our well being, we came up with medicine, a concept that's kept many people alive well past their prime.

The main job of a doctor is to look Mother Nature in the eye and spit in her face. Later, the doctors will often apologize with flowers and candy, claiming it will never happen again and that they truly love nature. But this lie starts the vicious cycle over again. Diseases which under normal circumstances would kill a person and mine the precious iron right out of their bloodstream nowadays stand no chance because of our extensive knowledge of drugs and vaccines and surgery and pointy medical things. Not only do Doctors prevent death, but they can also reduce discomfort caused by non-fatal illnesses and rogue lawnmower blades. With recent advancements in modern medicine, mankind is now living longer than ever. It would seem all is peachy thanks to these lifesaving individuals. But the medical practice isn't all sunshine and surgical candy canes. There's a dark side to this field, and her name is medical malpractice.

When medicine was first invented, the entire idea revolved around malpractice. If you had anything wrong with you, the answer was either bloodletting, leeches, or the beloved procedure of limb removal. People would walk into a doctor's office with a minor cold, and walk out legless or dead. After about a thousand years of this, someone figured out that changes needed to be made. It was discovered that filthy, rusty tools were perhaps the wrong instruments for surgery. Another important discovery was the danger of bloodletting, which came about when people learned that we need blood to live. Today's medical field is based on these two key principals. What malpractice is based on is a different story altogether. Principals such as fucking up, gross negligence, slicing, and maiming are all core values of the particular area of medicine. It takes a special kind of person to spend 10 years in college to become a doctor, only to screw it all up in the name of malpractice.

Malpractice can be any sort of medical mishap, ranging from deadly, to slightly less deadly, to hilarious, to really deadly. Anyone that's incurred the wrath of an unqualified drunken Doctor fresh out of one of Honduras' many reputable med schools knows the pain that can come with malpractice. Here is a recent example...

March 4th, 2002: A man walked into his Doctors office in Sacremento, California. He told the Doctor, "Doc, it hurts when I go like this!" The Doctor said "Well, don't do that!" The man later died of cancer.

Ok, so that wasn't really a recent example, but rather a modified version of a joke from the 1940s. Still, the point remains the same, whatever it was in the first place. If you're on the receiving end of a Doctor's incompetence, there are only bad things in store for you. Even if you aren't killed, there are plenty of other options for the malpractice minded Doctor to choose from. You can be scarred for life after surgery, blinded, or even be put into a coma. The latter is the most fun option of all, because you get all of the benefits of being dead with only ten times the burden on your loved ones. 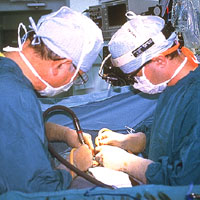 Actual footage of malpractice. Who knows what that tube could be?That's just the downside of malpractice though, and as you know, Something Awful is a very optimistic and positive site that always chooses to discuss the bright side of things while wearing our frowns upside down as proudly as a crown the whole time. While malpractice may seem bad to any logical human being with "ethics" or "morals", this cloud has a big fat silver lining known as litigation. Lawsuits of this nature are a veritable goldmine for people who are sly and wily enough to take on the system. Been longing for a Corvette, but don't have the money you need? Have someone spike your Surgeon's drink before your next hospital visit. If you survive, you'll be richer in both money and character! All at the low, low cost of whatever permanent damage was done to you throughout the process.

With the endless amount of stuff that can hurt us, you would think people would be thanking Judas that we have people like doctors who can heal our wounds and treat our humiliating disorders. But sometimes, doctors can do more damage than what brought you to their office in the first place. And who'll be sent to fix you after the doctor hurts you? Another doctor! This endless cycle of doctors being thrust at you like hot bullets from a machine gun has far too much potential for deadly mishaps and malpractice. Best to avoid the whole situation altogether by performing all medical procedures yourself. It can't be that hard, can it?