Tony Hawk 5 Could Be Worse, Blood Bowl 2 Could Be Bloodier 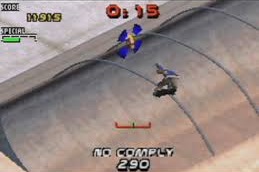 Pictured: A far superior game.Tony Hawk's Pro Skater 5 is a miserable experience. Choosing your skater isn't fun. Controlling your skater isn't fun. The visual style is blurry and vaguely gloomy. There are loads of bugs and many gameplay elements which feel like bugs but were put in on purpose. When faced with any design decision, the developers enthusiastically went with the "make the player sit through several loading screens" option.

This is a bad game. It's almost as bad as most of the articles I've written in the last few months. Still, the game could have been even more unpleasant. Theoretically.

A copy of Tony Hawk's Pro Skater 5 costs sixty dollars, which is merely insulting. It could have been priced at three thousand dollars.

The nude skateboard skin cheat code could have been enabled by default.

There aren't many ways the controls could have been worse. I suppose that pressing forward could have formatted your entire system, which would have been pretty bad. Or, even worse, pushing one of the face buttons could have filled all the remaining space on your hard drive with duplicate copies of the Tony Hawk's Pro Skater 5 installation.

The framerate is all over the place. At least it's not locked in Kindle mode, with a still image on the screen only refreshing after every button press, and once upon the completion of a trick.

Loading a level deposits you in a multiplayer session with people you can't interact with. From here you start in-level events by leaving the server, then loading the exact same level with a different group of people. Still, the multiplayer could have been more awkward. It could have removed the excessive loading and in turn made you play more Tony Hawk 5.

The game could have been named Destiny. For the first year after its release people could have handwaved its obvious flaws because there was "potential". When it was finally patched into a middling product that vaguely ticked off all the features it should have launched with in the first place, no one would have shut up about its grand ascension. Its obtuse and blatantly treadmill-y MMO mechanics that fell by the wayside years ago could have been praised by idiots.

Blood Bowl 2 Could Be Bloodier

Blood Bowl 2 is pretty much Blood Bowl with some rough edges filed down, nicer textures, and playable Bretonnians. If you don't know why that's something to be excited about check out this model from the tabletop game:

So it's a good game, obviously. For a product with the word "blood" in its title, though, there's not much blood to be found. The missed opportunities are rather obvious.

The crowd, for example. It doesn't exactly have a lot of variety. We're talking about a few hundred grubby clones of the same peasants. Why not mix things up with crowd models made entirely of blood? Just some big old blood people. Not everyone, mind you. That would be super creepy. I'm only suggesting we replace about a third, maybe half the crowd with volumetric blood beings.

How about the main menu? I feel like words are outdated. Make the whole thing one big 1997 javascript water ripple, but crimson.

Does the football need to be a football? Wouldn't it present some really interesting gameplay possibilities if it was a blood donor IV bag?

Lastly, what about the blood? Couldn't we turn it into sweat?

Blood Bowl 2
What if the ale casks - stick with me here - were filled with little 3D models of the word "blood"? 8/10

LEGO Dimensions
This gets one point for every hundred dollars you'll need to come up $200 short of affording all the announced LEGO Dimensions products. 6/10