As the novelty of a new World of Warcraft expansion wears off, subscriber numbers gradually begin to decline. This pattern is natural, especially for a game that's been around for a decade. In the wake of Warlords of Draenor, however, the dropoff can only be described with a plummeting scream followed by a crunchy splat. 5.6 million people have left the game in a matter of months. 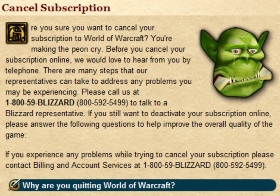 That's a lot of people. To give you a better idea of what that number means, 5.6 million people is at least 5.5 million more people than I will kiss in my lifetime. If you had 5.6 million boxes it would take forever to move into a new place. A 5.6 million gallon pool would contain the same amount of water as 5.6 million gallon jugs of water.

So why is everyone leaving? The exodus can't be attributed to any one problem, but a number of missteps that combined to sour the experience.

You might have heard that flying mounts have been disabled in the expansion's new areas. What you probably didn't know is that Blizzard also disabled regular mounts so players have to travel on foot, then they went one step further and disabled running as well.

There's a handy Adventure Guide built into the game. It suggests content that players might want to tackle at their current level. In Warlords of Draenor, this feature's useful suggestions have been replaced with tips like "Do something with your life" and "FUCK OFF".

Garrisons are a new feature in Draenor, a cross between player housing (with none of the customization you'd want) and a timer-based resource management cell phone game. A great idea on paper, to be sure, but unfortunately the invincible NPCs designed to protect each player's garrison were mistakenly flagged to attack the owner on sight. This has not been fixed.

Class balance is always a touchy subject. No matter how finely tuned a class may be, a subset of players will feel that they should be more powerful. Warlords of Draenor attempts to make balance more straightforward by trimming the number of abilities. Now each class has one skill. Rogues get Stab. Warriors get Hit. Paladins get Clobber. Priests get Punch. Druids rightfully feel shafted, as they get Transform (which allows them to randomly shift into one of their animalistic forms) and no attacks.

Given these irritating decisions - along with the controversial addition of realistic gore effects to the game's Pokemon-like pet battle system - it's easy to see why subscribers are leaving the game en masse. Is it even possible for Blizzard to win them back? I believe so. But only by doing three things.

Rocket League
Come play this very fun game with me. 9/10

Godzilla
I would have been overjoyed with a reskin of the Neo Geo game King of Monsters, but instead I guess I'll just trudge around in circles ineffectually slapping power generators forever. 4/10

Rory McIlroy PGA Tour
With an unbelievable selection of eight real world courses to keep players busy for months on end, EA is hoping no one will notice all the missing features and terrible performance. 4/10