The launch of SimCity has been... interesting? Disastrous? Obvious to everyone at the exact moment they found out it was going to require a constant connection to EA's servers? Entirely avoidable? Let's go with interesting.

At first no one could play SimCity at all because the servers were unable to handle the task. A minor inconvenience, to be sure. Then basic functionality was stripped away to make the game somewhat playable some of the time. 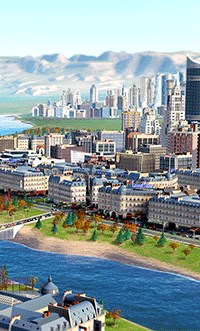 What if you wanted to play a private game by yourself while the servers were offline, or while you didn't have access to the internet? You're out of luck for no good reason. Multiplayer is so important that you're not allowed to play without it, even though you can totally play without it - provided you're logged in to the servers.

Even ignoring the server issues, SimCity has a surprising amount of rough edges. Sims, traffic, power, water, and sewage all behave in the exact same way, dribbling into the first available building instead of heading anywhere in particular. The first casino you can plop down is the only one that can actually make a profit. Emergency vehicles all respond to the same minor fire as the rest of the city burns to the ground. There is a constant demand for industry even when it's not needed at all. As it turns out, you don't need any industry or commercial buildings as long as you have a few parks. Hugely important gameplay systems go unexplained, and can only be grasped by trial and error, often revealing ideas that are completely counter-intuitive.

In spite of all this, the act of playing is incredibly pleasant. The music is pretty much perfect, as is the act of dropping buildings into place and zooming in to inspect your handiwork. More often than not, I'll find myself tinkering around for hours before stopping because of a server issue, a glaring bug, or obnoxious design decision. There's a lot of potential in the game. It's too bad that EA pushed the always-online down everyone's throats, that Maxis couldn't iron out the most glaring problems, and that the game is ultimately a series of puzzles with specific solutions rather than an open-ended toybox. Even though the circumstances surrounding this game are very different, in some ways it's reminiscent of Spore.

I've also been surprised by some aspects of SimCity's design that seem to have sprung from the mind of an Ayn Rand acolyte. A progressive tax system, for example, simply cannot be put in place. Why? Wealthy sims have lower tolerances for tax rates than medium and low wealth sims. They will complain and ultimately move away if they have to shell out more than 10%. While this initially seems like a tongue-in-cheek commentary on real life, there's no way around it. This is presented something you have to accept.

Of course, this is also a game where the government is completely in control of every building in a city, so I'm not suggesting it's a Tea Party simulator. I'm just saying that there are a lot of eyebrow-raising moments that could be misinterpreted as an endorsement of some wacky political beliefs.

SimCity
A technical disaster with a heart of gold and a ribcage that squirts acid into your eyes. 4/10

Impire
This serves no purpose, other than to make the developers of the original Dungeon Keeper games feel even better about their accomplishments. 5/10

God Of War: Ascension
The God Of War story is so amazing and the gameplay is so deep that they couldn't contain it all in just six games. 6/10