I'm going to say a lot of things about BioShock Infinite, but there's really only one detail that you need to know.

For a good chunk of the game you are accompanied by a character called Elizabeth. She can pick locks, revive you when you get shot in the face on too many times, point out goodies that you missed, make entertaining observations about your surroundings, and stay out of harm's way. She's pretty much the best AI companion that has ever appeared in a shooter. That's not the thing you need to know, though. It's this: Occasionally Elizabeth finds a coin and - knowing that you've been saving up for a tonic that will let you throw people into the air in slow motion - asks if you want it. You slap the Gimme That button to accept her offer and she flips the coin towards you. It makes a fwip-fwip sound as it sails through the air, followed by a satisfying thwap as your hand snaps shut around it.

This interaction is specifically designed to massage the pleasure centers of your brain. You're getting money. Your computer pal is being awesome. The rest of the game is pausing silently as the coin's sound effects plant a dumb grin on your face. It's the ultimate buddy moment, a high five and a wink rolled into one but not as dumb as either of those things. BioShock Infinite cares about the little details. It's much better than I was expecting, and I was expecting a better game than the really good BioShock 1. 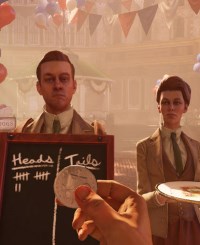 There's an experience that I associate with Valve's single player games. Your journey is authored, a series of carefully crafted sequences. You push forward out of a desire to see more of the world and infer all sorts of details that aren't explicitly stated. Even if the paths before you are relatively narrow they burst at the seams with more purpose than all the open terrain in the world. Combat and puzzle solving are expertly paced to release tension while capping off sequences that had something to say. In the calm after the chaos, you take a moment to absorb everything, then refocus and anticipate the road ahead.

Telltale's The Walking Dead was the first non-Valve game to grab ahold of me in that very specific way. Now BioShock Infinite has done it as well.

There is a run button, but I ignored it until I had to fight. This is the sort of game that makes you want to stroll everywhere at a leisurely pace and soak up all the sights, inspect every trash can, and find every secret. The environment isn't just beautiful. It's remarkably detailed. Every street feels different, every building given an insane amount of attention.

As you explore you'll find that the environment communicates a tremendous amount about the underlying themes, from nationalism to religion, racism, sexism, and war. If the game is an amusement park, these issues are presented as larger than life caricatures that pop out and jostle visitors before receding. Actually, that literally happens at a few points. You can go through the entire game with your arms crossed and brows furrowed, grumbling about the lack of in-depth discussion of these topics. If you accept the game for the impressionistic thrill ride that it is, though, you might be surprised by how deftly all of it is pulled off.

These themes are a launching pad for the narrative, which earns every dizzying revelation and benefits greatly from music. By working songs into the story in meaningful ways and using in-game performances to establish tone, BioShock Infinite does more with music than just about any game to date. Did you freak out when you first arrived in Mexico in Red Dead Redemption and that song kicked in? You're probably going to stop a half dozen times to lean toward your speakers and ask yourself if you really just heard what you thought you heard.

The save system, though? Come on. Seriously, come on. Checkpoints are terrible. Not having the option to manually save is worse. If you want to reload an earlier sequence you have to start at the beginning of that chapter, and when the game autosaves it writes over your last autosave, wiping out progress in a later chapter. This is bad.

Still, BioShock Infinite is a game that exudes confidence and craft. It has a clear vision, and that vision is brought to life with a world that's an absolute pleasure to gawk at while munching on stolen cotton candy and shaking your head at racists. If all big-budget games had such a strong sense of purpose and took half as many artistic risks, the industry would be in a much better place.

BioShock Infinite
If the feeling that you got from the tram sequence in the original Half-Life could last for the better part of an entire game, this would be the result. 10/10

The Walking Dead: Survival Instinct
I wouldn't call this a low effort tie-in game, because I don't think they put in enough effort to decide how much effort they wanted to exert. 1/10

Gears Of War: Judgment
If a muscle man shoots a Locust and no one cares, does it make a difference? 6/10