) is roughly equal in value to one pair of Shredded Skeleton Warrior Yoga Shorts.

) is roughly equal in value to ten Copper, or three Elemental Bear Diaries.

) is roughly equal in value to one hundred Silver, or fifteen Premium Vendor Trashes, or half an hour running laps in a field waiting for the same monsters to respawn so you can kill them by mashing the same buttons. 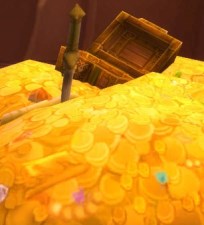 ) is roughly equal in value to three Copper, or half a Womp Rat Heart, or one tenth of the cost of repairing a low level Roast Chicken, or the two seconds of pleasure that you experience after equipping a cool piece of gear before throwing yourself back into the mindless treadmill.

) is roughly equal in value to five Intergalactic Credits, or a rare quality backpack armor, or half a ride on the Dire Carousel Transit System, or three Robot Meats, or the fee that you pay a trainer to learn how to pick a flower off of the ground and put it in your bag.

) is roughly equal in value to five Taters, or the real world money cost of a single 25% speed boost potion that lasts half an hour, or the fee to create a guild with a name that combines the game's setting with pop culture to result in a hilarious pun, or the minimum tip for a roleplay lapdance, or a Legendary tier Orc Bait, or the time you spend running to the quest giver in a three-room inn the size of a football stadium.

) is roughly equal in value to three Dilithium Crystals, or one tenth of what you pay a trainer in order to learn how to sit on a mechanical chicken mount, or ten times the effort that goes into the writing of a typical quest's dialog, or one millionth of what you'd be willing to pay to never set eyes upon a public chat channel again, or the time that you spent watching someone else make off with an escort quest that you were about to begin yourself, or one Copper for every spam you receive from a gold farmer in an average week, or one pair of Reinforced Skeleton Warrior Yoga Shorts.

) is roughly equal in value to one Glory (

) or any of Guild Wars 2's fifteen other currencies, or one of Neverwinter's eighteen currencies, or an Eve Online Isk, or an Elder Scrolls Online Septim, or a Matrix Online Keanubuck, or a Final Fantasy XIV Gil. That is to say that they are all highly valuable. I am prepared to lay down my life in their defense.

Diablo III: Reaper Of Souls
I'd give more thought to the novelty of a Diablo act taking place inside the walls of a thriving city if I wasn't so busy hurling a shield through demons like a holy magic-fueled Captain America. 8/10

Deus Ex: The Fall
Steam is becoming a miserable dumping ground for ports of mobile titles, and the fact that this is one of the better games to fit into that category is very depressing. 5/10

Infamous: Second Son
It's so fucking weird that the ending is a cinematic of that dude on stage at E3 tearily recounting the time he was involved in a protest. 7/10

Kinect Sports Rivals
Sure, it's a terrible game, but let's not jump to hasty conclusions about Kinect until they patch it to reliably function and Zumba Fitness Angry Birds Olympics comes out. 3/10