Overview: A pair of would-be vampires uncover the secret of immortality, unleashing a stream of vampiric death on unsuspecting college students.

The Case For: This rare, raw and extremely violent independent feature revisits the vampire myth and presents an outrageous new take on the theme.

The Case Against: I got that off the back of the box. This film's best quality is its rarity, it's as "raw" as that half a corndog you threw over the neighbor's fence back in 2002, and it will make you as violently ill as said corndog would if you ate it today.

Welcome, faithful readers, to the first Awful Movie Review of 2007! This week it's my distinct pleasure, nay, my very duty to bring you yet another movie that you should under no circumstances bring within fifty feet of your DVD player unless your DVD player is one of those shitty generic ones with a funny, vaguely pharmaceutical name like "Verpex" or "Amitron" and you're trying to convince your significant other to pop for an Xbox 360 as a replacement. This flick might as well have sharp shards of glass sticking out of the underside of the DVD for all the good it's going to do your home theater system, to say nothing of your rapidly eroding faith in the tragic wonders of low-budget cinema.

Today's pseudo-theatrical enema comes in the form of Night Fangs, directed by Uruguayan prodigy Ricardo Islas. Our friendly neighborhood Internet informs me that Islas is apparently referred to in certain circles (the seventh circle of film hell, possibly) as the "JOHN CARPENTER OF URUGUAY". I'm going to assume that they are basing this off of Carpenter's Ghosts of Mars, which I'm sure I'll get around to dissecting some lonely evening down the road. Comparing Night Fangs to a film like Halloween is like, well, it's like comparing a small cow turd by a stop sign to Halloween. If I can come up with a better analogy, I'll go back and edit it. Don't hold your breath.

I rented Night Fangs with a small, desperately flickering tendril of hope that I might just bump into a minor classic. Seriously, I had other films standing by to review in its place if Night Fangs turned out to be even remotely watchable. You see, Night Fangs has one helluva card to play: lesbian vampires. Any horror buff has seen lesbian vampire films before. It's a good gamble. Boobs, blood&lesbians&nudity, lesbians, etc. There are worse hooks to hang a film's hat on, all things told. 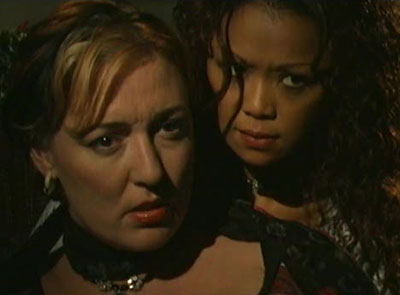 The film opens with our intrepid lesbian art teachers meeting an unsuspecting guy in a park, off a Craigslist-type solicitation for wild sexual escapades of some sort. Cut to a dingy apartment where this dumb SOB is hogtied to a chair anticipating wild sexual escapades of some sort. Please raise your hand if you would of your own free will meet up with a couple random chicks you met on the internet, shake hands politely, and then have them take you to some nasty-ass tenement and shackle you to a chair for what unfortunately turns out to be gory ritual sacrifice. Turns out these ladies are members of the Thuggee cult. As an expert on the Thuggee religion, having seen Indiana Jones and the Temple of Doom multiple times, I perked right up, but sad to say this is largely the only time anything Thuggee-related is referenced in this fine film. All hopes of a Mola Ram cameo were quickly dashed ("You doon't&.beweeve me? You weel, stupid internet horny-man. You weel become&a true beweever!")

With the shocking rapidity of a shotgun blast to the face (pray to God you're so lucky), we learn that the Thuggee thing is just some silly side fetish, and our gals are actually fanatically devoted to the study of Elizabeth Bathory. Since Elizabeth Bathory isn't adequately represented in any of the Indiana Jones films, I was altogether out to sea. Since researching this aspect if Night Fangs ultimately translates to spending even one more minute of thinking about this film than I absolutely have to, I regretfully had to pass. Suffice it to say that Elizabeth Bathory lived hundreds of years ago and committed all sorts of atrocities. The first chunk of the film centers on the girls' attempts to procure Bathory's diaries, hoping to discover a secret ritual that will turn them into vampires and bless them both with eternal life.

One of Bathory's vices seems to have been bathing in the blood of her victims, mostly virgins. If I had millions of dollars and nothing but time on my hands, I'd love to see a version of this scene milked for comedy: two aspiring-vampire goth chicks in a blood-filled bathtub wondering what's next.

Lupe: &Feel anything?
Jennifer: Nope.
(a pause)
Lupe: This is stupid.
Jennifer: I'm kind of hungry.
Lupe: (hopefully) For blood?
Jennifer: No, like for. Uh, I dunno, like a Hot Pocket. If we have any.
(another pause, equally awkward. Blood swirls lazily around the pair of depressed non-vampires)
Jennifer: Put on that Evanescence CD, maybe that'll help, I mean.
Lupe: You're dumb. 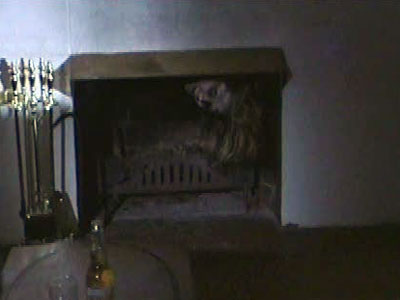 Chim chiminee chim chiminee chim chim cheroo / My name is Ricardo and my films smell like poo After procuring the Bathory diary, Lupe and Jennifer learn that they've been going about this all wrong: they need virgin blood to graduate to Living Dead Lesbian Art Teacher Vampire status (hereafter referenced as LDLATV) With newfound enthusiasm, they promptly execute one of Jennifer's art students, a young brunette virgin named Amy. Amy's kind of hot in a desperate-at-1:45-a.m. sort of way, the kind of girl you might give a fake phone number to simply because you know a relationship will entail endless Green Day mixtapes and long letters in that irritating looping cursive. At any rate, she gets the knife, and soon we get lesbians in a tub wondering if they change slowly or if it's real sudden-like.

Surprise! Amy turns into a vampire, then they all do! I don't know how that works, and if you think I'm going to cycle back through this film and rewatch it to capture the subtle nuances of the plot vis-à-vis vampire transformation, you must be new to Rivetz's Awful Movie Reviews. Not only that, I can't really zip around in the DVD, since the production company decided to make the DVD have only two 49-minute-long tracks, evidently because the production team correctly deduced that no one in their right fucking mind would watch this thing twice. Besides, any attempts to find logic in the mechanics of vampirism in this movie are totally fruitless, but we'll get to that.