It just so happens that today is the two-year anniversary of the venerable institution that is Your Band Sucks. It also just so happens that it’s my birthday, and I don’t feel like doing any actual work. Under these circumstances, most lazy internet hacks would leave you with some kind of boring retrospective of stuff you’ve already read. However, since I’m generous and charitable and I love my readers, I am going to indulge you with something weightier than that. I’m going to give you a non-boring retrospective of stuff you’ve probably never read! 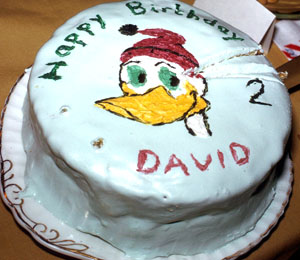 Wow, I found a cake that says "David" AND "2"! I'm a genius. Also, check out that radical duck, he'll fuck your sister.Long before my genius was discovered by Zack Parsons and his amazing web-A&R skills, I spent most of my free time being a jerk. After I graduated high school, I couldn’t get away with being a jerk in person anymore, so I resorted to being a jerk on the Internet. The Something Awful Forums are probably the best place on the Internet to be a jerk, so I honed my asshole-craft there, along with thousands of other sarcastic nerds.

The thing that actually landed me my job as a professional Internet asshole was a thread on the Something Awful Forums titled “Post any popular band/musician and I will snobbishly tear them down.” It worked just how the title implied: people named bands, I made fun of them. The thread went on for ages, and I finally had a use for my only two defining features: the fact that I know more about music trivia than anyone should, and the fact that I’m a huge jerk.

I recently delved into the Something Awful archives and had a look at that thread, and I thought it might be fun for you guys to see my humble beginnings. What follows is a few of the better reviews I did. I edited some of them a little, because I had spelled some things wrong, and because I occasionally swore too much and wound up sounding like a trembling, red-faced teenage troll. I have preserved the names of the forum members who requested the bands for me to mock, so that they may relive their brief brush with an Internet legend (me).

I realize that this is incredibly long, but I don’t want to split it into two updates, because that would mean not writing anything new for a month, and Lowtax would cut off my thumbs. Please notice that unlike any of my other articles, this one has page breaks!

Enya reminds me of the feeling of pissing in your pants. Its all warm and nice, but at the same time it's fucking disgusting on so many levels.

Calling Moby a sellout or a self-important little bald vegan dork would be too easy. That doesn't mean I won't do it though, obviously: Moby is a huge sellout, and he's also a self-important little bald vegan dork. Also, what the fuck was with his folksy blues direction on Play? It stank of desperation and forced musical "experimentation" and "diversity." I think he was trying to pull a Graceland and failed miserably. Luckily his next album was better. Oh wait, no it fucking wasn't, it contained "We Are All Made Of Stars," which was his worst soulless Joy Division impostor song to date, and he's made a lot of really bad ones. Even his old material, which is revered by similarly bald and vegan twats with pupils the size of dimes, is aging terribly. If you listen to "Go" right now, you'll note that it sounds like it should be on the Marvel Vs. Capcom 2 soundtrack alongside "Gonna Take You For a Ride." 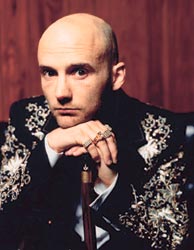 Here's my impression of me listening to a Bauhaus song: Okay, here's the intro, it's pretty good guitar playing and drumming, hey, maybe this'll be a good song. Oh shit, who's this kid singing? Why is he singing in that funny voice? Did someone kick him in the nuts? Wait, what the fuck, why is he singing about bell towers and grim wilderness and shit? Is this a joke? This must be a joke! Ha! How wickedly hilarious! I bought Bauhaus's greatest hits album. It's true, I went in a record store and actually bought it. You know why? Because I regard it as a comedy album. One of the funniest comedy albums ever produced. They are just so fucking laughably gothic that I'm sure they can even make goths crack a smile.

I don't care how good his lyrics are, he sounds like a buffalo coughing up a lung. As was demonstrated by Downtown Train, even fucking Rod Stewart can sing one of his songs better than he can. Aside from that, for every decent song he writes he's got a ton of shitty gimmicky songs. Try listening to "I'm Big In Japan" or whatever. Hilarious. Take an old, stupid cliché and write a mumbling shit-heap of musical rubble over it! Genius!

If there's anything more soulless and boring than blues-rock, it's heavy metal. And these hapless bastards managed to practically create both. May God have mercy on their souls. They're permanently filed away in my brain in the "CLASSIC ROCK - DO NOT LISTEN" category.

Who are they again? Are they the nu-metal band who sings vaguely about how unfairly the world has treated them and how depressed they are with it all? Are they the one with the hideously compressed pro-tools production that sounds like ass soup? Hmm... you'll have to narrow it down further. Are they unattractive losers who resorted to making hard rock because they didn't have enough charm to coast through life on limited wits? Nope, still not ringing a bell.

I should track down and kill every member for inspiring the hideous wave of nauseating British loser fucking vagina rock that's currently washing over us. Sorry Coldplay, I don't want to take any advice on love from a scrawny lovelorn little pussy like you.

The Smiths are definitely “where are they now” material at this point. Morrissey? Oh, he's floundering around going on tours wherever he can find a big enough population of gay Hispanics to buy tickets. Johnny Marr? He made a record that sounds like Oasis with Steve Miller singing. The other guys? Who the hell are they?

Incubus? Oh boy, more tuneless semi-metal pussy crap for drunk frat-boys who can't tell the difference between right and wrong. The only way these pretty-boy dorks look hard is if you put them next to the rest of the frat-boy record collection. Yeah, they could probably kick Dave Matthew's ass, but so could my cat.

As for Muse, they need to fucking lighten up. You can't make a whole record of nothing but off-the-wall guitar mumbo-jumbo and madman screaming without all the songs sounding the same, no matter how much of a fucking musical genius you think you are. You hear me, Muse? Try making a record an actual human being can listen to, then we'll talk.

They say that Pavement turned into a lame bluesy-rock band by Terror Twilight, but at least they still had some good lyrics and original ideas left in them by that time. As for Beck, when he got to the Serious-Nigel-Godrich-Album phase, he managed to create easily the most boring alt-country piece of trash ever put on record. What happened to OUR Beck? The one who was going to go back to Houston and do the hot-dog-dance? The with the shit-kicking speed-taking truck driving neighbors downstairs? Hopefully he'll be back someday, and he won't feel the need to make a record that's already been made A THOUSAND FUCKING TIMES ALREADY.

Brian Molko is the most hilarious transvestite since Eddie Izzard. But at least Eddie Izzard's comedy is intentional. 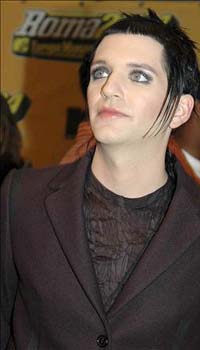 Industrial music is for fat pimply dudes who mistakenly think black trench coats are slimming. And you know a band is insecure about their tiny penises and lack of interesting ideas when they have to resort of 40-foot walls of flame and shit like that in their stage shows. See also: Pink Floyd.

As for Wesley Willis, if I wanted to listen to music written by a retard, I'd put on a Good Charlotte record.

I always get him confused with Ben Kweller, who is a similarly unoriginal curly-topped indie poseur. They're probably about equally ugly, too. I think Ben Kweller is the one who thinks it's cool to rip of Weezer ripping off Pavement, but I'm not sure, could be either one. All I know is that when my radio station gives away shitty CDs that nobody will even listen to for free twice a year, I'm not taking either of them home.

Jesus, these guys wore out their welcome faster than Poochie on the Itchy and Scratchy show. Yeah, you're wry hipsters, we get it. Now pack up your one low-charting hit single and get the fuck out.

IRQ requested:
Do Rush, I can't want to hear this.

You know, I'd love to rip into Rush, but I can't think of anything bad to say about them that hasn't been said a thousand times already by any of the sane people who tried to listen to them.

I'm Crap requested:
I see you're studiously fucking ignoring the guy who said "My Bloody Valentine".

I figured I'd follow in the footsteps of Kevin Shields and simply ignore all the people who wanted me to do it, and instead just fucking sit on my lazy ass all day and get enormously fat.