Matt Burdine Dot Com, submitted by Stuart. Matthew Burdine is not your average computer nerdy geek-type person, no sirree Bob! He uses a complicated system of codes and electrical impulses called "Linux" with which he manipulates the complex and mysterious realm of cyber-technology! Every electrical impulse and series of ones and zeroes is at his beck and call! With his computer genius and savvy tech know-how he is able to guarantee his own success and fame, and indeed, his position in life is already to be envied: 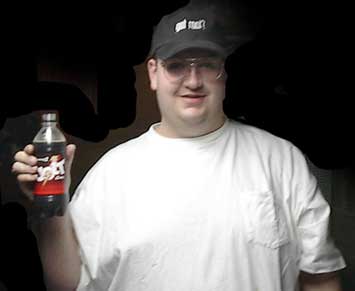 I took summer school during the summer break of 2001 to complete all of the graduation requirements of my high school a year early. Instead of going to my senior year at high school, I am now attending ITT Technical Institute in Pittsburgh. There I hope to graduate in 2003 with an associates degree in Information Technology and Computer Network Systems.

WOW! Mr. Burdine is such a genius at the magical and complicated computer machine that he was even able to exactly pinpoint my location all the way from Pittsburgh!

Your Internet connection has been traced to Tampa, which is in Florida, located in United States. You are at 27.9733 degrees latitude and -82.4717 degrees longitude.

This is especially interesting seeing as I was not aware that I lived in Tampa! I had been under the impression that the city closest to me was Seattle, Washington! That just goes to show that I should never assume that I am anywhere close to as mentally or intellectually competent as someone such as the esteemed Matthew Burdine. After all, someone with that amount of computer knowledge is to be feared and respected, to say the least. Mainly feared. Definitely feared.

Besides programming and networking, I have a major interest in computer security. I enjoy staying up-to-date in this fast paced realm of computing.

One of Matthew Burdine's personal triumphs is his Case Modification project (aka. godb0x)which can be found on his projects page. Here, Mr. Burdine's superior knowledge of not only the inner but also the outer workings of the computer really shine through. Just look at the ambitious list of modifications Matthew intends to perform:

1. Window Mod - A simple hole cut in the side of the case with a window mounted in it.
2. Light Mod - A neon light wired to the power supply to provide a unique glow through the window.
3. Multiple fans - Multiple (three or so) fans mounted strategicly throughout the case. These are simply for cooling.
4. Handles - Handles on the top of the case for easy mobility.
5. Wheels - Wheels on the bottom of the case for easy mobility.
6. Temperature sensing unit - Themometers mounted in a drive bay to monitor the temperature of internal components.
7. Baybus switch board - Multiple switches to control fans and lights at variable voltages.
8. Removable drive bays - Hard drive swap kits.
9. Custom engraved case badge!

Matthew Burdine's site also contains a convenient link to PayPal lest anyone want to donate money and finance him in his endeavors to explore new and exciting technology! He also posts a link to Hot or Not so that everyone can go to the site and see first-hand what a worthless doughy mess he actually is. But wait, there's more! Matt's expertise in the realm of computers has produced the WORST PHOTOSHOP EVER for your viewing enjoyment. Unfortunately, I couldn't get his guestbook link to work, but I'm sure that this is no fault of Matt's.