Male sexuality: love, pleasure, and happiness with women, submitted by Antti. Okay, now I'll be the first guy to admit that I have absolutely no clue what this bozo wagon is bitching about on his eye-detonatingly horrid neon blue and yellow computer screen show site. I think this jackhole just wants an excuse to use letters the size of entire hams while trying to make my computer screen explode and send the glass shards into my face which he thinks will kill me but hey buddy, I'm a goddamn war veteran and I eat glass for dinner every morning I wake up! So you'd better not try any of that funny stuff on me because it won't work even if I have no clue what this computer screen page is about. 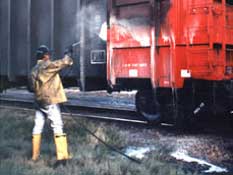 PS: Oh wait, I forgot about this especially pointless and putrid section, inappropriately entitled, "How to get "FREE" Sex":

Over the years at bars, I have danced with thousands of women, shared pleasure with hundreds of women, and even exotic danced for women for money.

In my book, "The Quest for Love", and in my classes and lectures, I teach some of the "secret skills" for being good at "making women happy".

I REJECT the RAPIST philosophy of Marxism. Men who think women "OWE" men "free sex", are NO DIFFERENT FROM Radical Feminists who think men "OWE" women "free money". Radical Feminists believe that if a woman marries a man for a year and "gives him sex", then she has the right to divorce him, and THEN:
(1) take HALF of his money.
(2) be paid an INCOME for the REST OF HER LIFE.
That is the ECONOMIC RAPE OF MEN !!!!! The ECONOMIC RAPE OF MEN IS WRONG !!!!! The SEXUAL RAPE OF WOMEN IS WRONG !!!!!

PPS: Apparently terrorism has something to do with loving or not loving women, as the wacko crackerpot nutjob writing this computer screen has a few psychotic rants about Osama Bin Laden and the Middle East and bombs and camels and sand and blah blah blah, he's crazy blah blah.