Maddad, submitted by Bowie. Welcome to the Internet home for David Madison, one of the many nutcases taking up precious space in the solar system you and I call home. 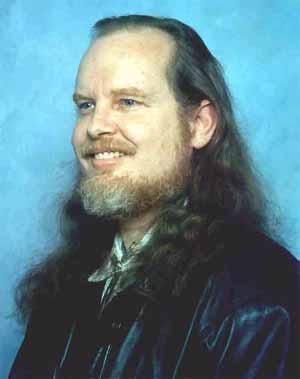 I'm a 48 years old college graduate, caucasian male, 6', 220 pounds, reasonably fit, and have a non-usual family. I have shoulder length sandy brown hair, blue eyes, am always smiling, and wear western and leather clothing. While I don't smoke, I drink moderately; never had a hangover. I don't push my firm Protestant beliefs off onto other people.

Well, he seems pretty clean cut. But like all firm Protestants, David is big on the hardcore BDSM. For the uninitiated, BDSM isn't a medical degree or technical certification you get for knowing certain Microsoft products, and as far as common sense and logic tells me, it's also not very Christian. I think it's probably that whole "dress like Pinhead and torture your disturbed partner(s)" thing, which is kind of frowned upon in the book of "Don't Be A Goddamn Pervert So Much." If I'm not mistaken, one episode of the Bible even has an entire city being smited up real good for comparable deviance. How is it that David is able to get away with his sinful lifestyle and still call himself a Christian? Well, the only way I can think of is that he has constructed a large lead chamber. Neither Superman nor God can see through lead, so he's pretty much open to do whatever wacky shit he wants to do with total impunity as long as it happens inside his personal sex chamber. Hell, given the devilish smirk he's wearing, I have no trouble imagining that this man is capable of such intricate and sophisticated deviance.

In other words, he's going to provide blueprints for his special sex chamber. I hope so, because I had this great idea about how I'm going to rob a bank and then seal myself in this chamber until the statute of limitations runs out. I'll be a free man. Better yet, a free man with pockets full of cash money! No wait, that was from an old episode of Superman. Sorry.

To further add to the character of this holy warrior, he's married to a woman who suffers from some unfortunate health problems that leave her with the mental capacity of a seven year old. So, is this guy having hardcore sadomasochistic sex with a proverbial child? Or is he cheating on his pseudo-preteen wife? Either way, he certainly plays on the edge! Step back, dude, that yellow line is there for your safety!

Thankfully the grand marshal of the crazy sex parade has provided some sexy transcripts sure to leave no vacancies in the motel we as a society collectively refer to as your pants. He even provides some narration, highlighting facts about his partners and their feelings. Here is but one chunk from these hellish minutes of torture:

From there it dissolves into a train wreck of random banter intermingled with bursts of cybersex so cybersexy you will wish you were dead. You know you are in for a hot time when your mate is talking like the average diseased AOL primate, spewing out "LOL," "LMAO," and choice bits of Internet shorthand like some crapulent-brained monstrosity. Even Internet sex has to be streamlined and efficient to ensure maximum stupidity! "Laughing My Ass Off" is something I'd sure like to hear during a romantic encounter.

Among other notable attractions featured here are numerous discussions about his job at a chocolate factory and how it turned sour. Personally, if I was a chocolate factory owner – and believe you me, I'm working hard and staying in school so that I may one day have such an opportunity – I definitely would not want a lunatic like Maddog on my payroll. His crazy lifestyle is simply not the kind of crazy lifestyle I want associated with my chocolate. There is also quite a bit of talk about his ass kicking karate son. In the off chance ass kicking karate son is reading this: please don't kick my ass with karate or any other means available to you.

Finally, for no reason whatsoever, I now have more respect for sanitation engineers.