Friday, Apr 16, 2004 by Corin Tucker's Stalker (@DennisFarrell)
Know of an awful site? Send it to us and become a hero!

Diaper Station, submitted by ghetto. Not too long ago I highlighted a site that featured photographs of grown men wearing diapers. I've never given a second thought about an ALOD before, but suddenly I feel bad about that one. Why? Because I completely disenfranchised all of the full grown women out there that have lost touch with reality. 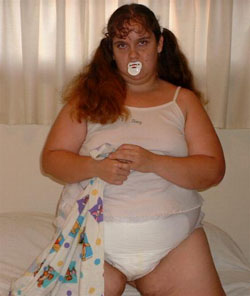 To be fair, there's much more than just pictures on Diaper Station. There's also a bunch of shit you can buy. They have everything from diapers to cribs to hypnosis cds, which I assume are to help convince yourself that there's nothing wrong with you.