Thursday, Feb 10, 2005 by Reid "Frolixo" Paskiewicz
Know of an awful site? Send it to us and become a hero!

Powered By Christ, submitted by SFG. Since it was just ash Wednesday and I ate a huge side of beef, I'm atoning for my sin by linking a religious site today. Well in reality its a conspiracy site but it poses as a religious ministry, which is not uncommon. Hell, if I really believed that God would strike me down for eating a Sausage McMuffin during passover than I might as well believe in reptile people, am I right? Why is there a tight pain in my chest all of the sudden? Please excuse me. 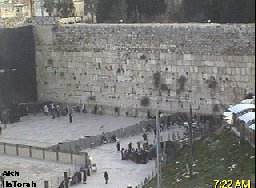 I thought I saw suicide bomber for a second but it was only a guy opening a Baby Ruth.

I have to admit that I'm just using this site for the webcam portal of Israel. I wanted to see if I could see a suicide bombing live, but since there are peace talks now I might be watching for a long time before I see any death. Stupid peace.