True.com, submitted by Me. True.com is another stupid fucking dating site with some gimmicky “twist” that sets them apart from the others. The twist? Instead of attracting paranoid hermits by happenstance, they invite them in on the very first page. Have a look:

That’s right. Legal threats and background checks. How inviting. I wonder what their testimonials page would look like?

I was sick of doing the singles thing. Going to the same bars, meeting the same guys. Most of them were felons, and some were even married. Fortunately, I stumbled upon True.com while searching for an online pharmacy to fill the prescription for my PTSD meds. My life has never been the same. Their patent-pending InsaniSearch technology matched me with David, and I felt an instant connection.

Six short months later, we were married, and True.com took me to court, ruining my good name and credit rating. I’ve been on suicide watch at a state psychiatric ward for the last six months. Finally, it feels like I’m home.

If their casual legal threats aren’t enough to convince you that the site was conceived by a Vietnam vet with unmedicated paranoid-schizophrenia, this ad should do the trick. 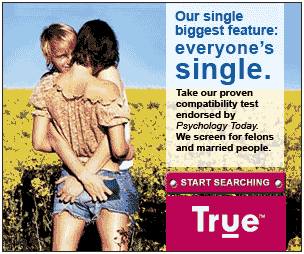 Let’s analyze the subtext of this image together. Ostensibly, the image is a depiction of two satisfied True.com members. One of the ways advertising works is by illustrating a “best case scenario.” What this ad seems to be suggesting is that if everything goes right, you too can have your pockets rifled through by a stringy haired androgyne in a psychedelic meadow of nondescript yellow.

As an aside: Where the fuck are that guy’s legs? Is that why he’s so happy? Because he found someone to carry him back to civilization before he starved to death inside some forgotten corner of Roald Dahl's verdant imagination? Nothing about this fucking site makes sense I need to go take a nap.