Tuesday, Dec 06, 2005 by Rich "Lowtax" Kyanka (@TwitterHasBannedAllMyAccountsEver)
Know of an awful site? Send it to us and become a hero!

ShinnneSunliquid, submitted by PacerX. Jason Kokinda is a person suffering from severe, crippling mental problems. His first and foremost issue revolves around his complete lack of artistic skill. The second issue concerns the terrible music he produces, possibly by lunging at random musical instruments and hoping he smashes into them before his caretaker bursts into the room and turns off his Fischer Price microphone. His third, and definitely not his last issue, is his incredible ego which convinces him he's some kind of musical genius like Mozart or Nelly. 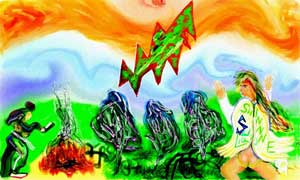 The 120+ songs below were all written by Jason Kokinda. They are rich with intelligence, and convey a diverse variety in styles, because of their deep roots in all major genres. This helps to reflect the diversity of the traditional music world, in a completely new universal music theory based on phonetics trademarked REAdy+ROK. None of this material is based on material previously released or compiled with other artists. It's truley a lifetime of mega-hits, like bigger than our pop music culture itself in variety and quality.

So what does a lifetime of mega-hits sound like? Well... this. I'd make fun of this guy more, but really, I think he does have some serious mental condition which will probably cause him to hunt me down and stab me to death with my own ribcage.